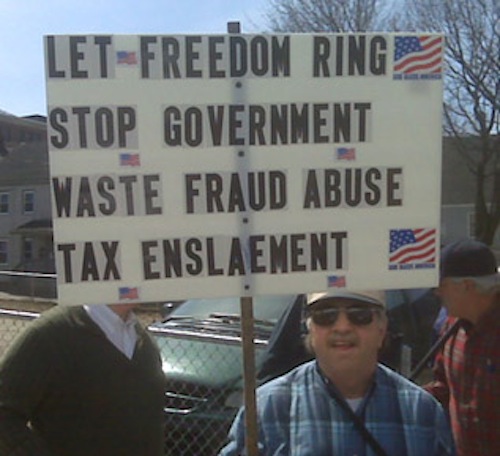 In a simpler world, this post could begin with, “There’s no denying the popularity of the Tea Party,” but even that aspect of the movement is up for denial. Even after several high-profile primary victories, the size of the Tea Party—composed of disparate groups with neither national hierarchy nor local registration—joins the movement’s platform, origins and political impact in the realm of conjecture. The Tea Part isn’t even a party. It is either a grassroots uprising of constitutionally-minded Americans or a series of puppet shows by Republican flacks or a fringe movement exaggerated by a desperate media or some combination of the three, and no one will really know until the midterm elections, if then. Meanwhile, we have analysis. As with any inquiry into the totally unquantifiable, that analysis has taken on an element of the aesthetic.

Unlike most reporters, who have sought to understand the movement by interviewing pollsters, political strategists and other spectators as mystified as they, Taibbi actually went to a bunch of Tea Party meetings in Kentucky.

The results are exhilaratingly grim. From a hall of sexagenarians protesting the welfare state on scooters they got free via Medicare to Rand Paul’s post-primary embrace of Republican corporate donors, Taibbi presents a movement whose signature element is stunning hypocrisy. Oh yeah—and white solidarity, which is not to be confused with racism. “It’s not like the Tea Partiers hate black people,” Taibbi writes. “It’s just that they’re shockingly willing to believe the appalling horseshit fantasy about how white people in the age of Obama are some kind of oppressed minority.”

Like the fervid conviction that we must slash government spending while preserving defense, social security and Medicare, that’s a belief made sustainable by our unwillingness to interrogate it. Either by some misguided sense of objectivity or a cynical decision to see how powerful they become, the national media seems to have tacitly agreed not to call the Tea Party stupid. The mindless resentment of elites—that is, anyone who lives in a city, has actually accomplished something in politics or social justice, or insists on principles of rational argumentation—that animates Tea Party rhetoric has infected a quisling media bent on casting itself as Just Folks, too.

Take Stanley Fish, who strives to be to smart people what FDR was to the rich. The man who once called his column Think Again has A) grown a hilarious mustache and B) written this piece alleging that “Liberal pundits and the politicians whose agendas they favor…fail to realize how much the disdainful tone of their criticism fuels [the Tea Party movement.]” Because he is a jerkoff, he compares the Tea Party to Antaeus, who grew stronger each time he was thrown to the ground.

Fish argues that “scathing remarks” about the Tea Party’s racial politics and nonexistent policies are symptoms of an American liberalism that just doesn’t get it. Can’t we see that pointing out the stupidity of their rhetoric only proves that we’re elitists? In his ten-year bid for the admiration of the crowd, Fish seems to have forgotten that the value of an idea is assessed by more than its ability to make people like you. When a Tea Partier says that Obama is a socialist, his anger at being told he doesn’t know what that word means doesn’t make him any more right. Politics is the marketplace of ideas, not the scale on which they are weighed.

Writing in the same paper the next day, Thomas Friedman offers a much more intelligent assessment. He argues that there are two Tea Parties, one of whose incoherent anger renders it irrelevant and the other articulating a real and serious problem. The middle-aged white people yelling outside the library have one thing right: this country is in trouble. It’s been in trouble for years—certainly years before we got that black President—and cutting taxes and slashing spending, simple though it sounds, isn’t going to fix anything. America has complex problems. Now is not the time for a mass political movement devoted to radically simpler thinking, nor is it the time for a media who should know better to coddle it.

Besides “the President sucks,” “taxes are too high,” and “there shouldn’t be a deficit,” I defy you to name one idea the Tea Party has contributed to American politics. In the breakdown on the way to Disneyland that is our present historical moment, the Tea Party is the child standing on the back seat and shouting about how he wants to see Mickey. The only good part about the situation is that they are not actually children. They are super old, which means it’s okay to slap them.