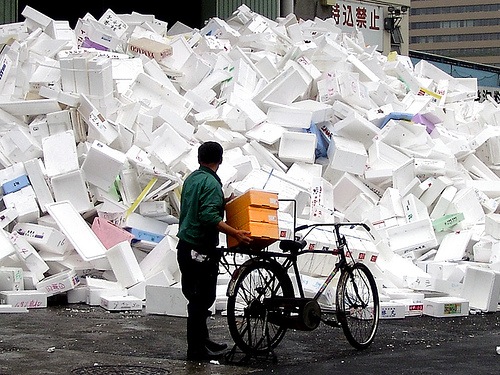 American conservatism has always placed a high premium on the past, but it was not until its victories in the last election that the Republican party made good on its promise to actually reverse the flow of time. In the spirit of fuck you, the GOP has reintroduced Styrofoam to the House cafeteria. In theory, this measure will save the American taxpayer half a million dollars per year.*

That it also undoes one of Nancy Pelosi’s pet projects and magically transports all diners to the year Back To the Future came out is just a fun bonus. The more you think about it, the more the switch back to Styrofoam is an incredibly versatile signifier. I submit that the Styrofoam cup is the best symbol yet for the Republican party: it’s white, it seemed like a great idea in the eighties, it’s made of oil, and even though you’re done with it, it’s going to be around for 500 years.

If you enjoyed that series of parallels, you’ll love the program that Republicans just replaced. Led by then-Speaker Nancy Pelosi, the House launched the Green the Capitol Initiative in 2007, stocking their cafeteria with “locally grown organic food, recyclable utensils and cups made of cornstarch.” According to one unnamed Democratic staffer—or possibly just a Hill reporter who ate in the cafeteria once—”straws were known for melting in hot beverages, and the forks ‘couldn’t penetrate a piece of lettuce.'” If there’s a better metaphor for the 21st-century Democratic Party than a person trying vainly to spear a cucumber with a cardboard fork in the seconds before his coffee cup spontaneously melts, I haven’t seen it. Oh, yeah—it also cost “$475,000 per year…to truck the compostable waste off to a facility in Virginia.”

So these are apparently the choices presented to the American voter: either a “green” program that uses semi trucks to drive local organic garbage to another state, or carcinogenic flatware that, after it’s been withdrawn from Eric Cantor’s mouth, floats in the ocean for half a millennium. Again, symbolism runs high. At a cost/savings of 500 grand, both the Green the Capitol Initiative and the Remember When Big Macs Came In a Spaceship? Accord are fiscally insignificant. Like eating organic food, burning diesel fuel to transport your recycling or spitefully throwing your beer can in the cardboard bin, both programs are gestures that have symbolic meaning but little actual impact. In other words, they are lifestyle politics.

I first encountered the concept of lifestyle politics in Joseph Heath and Andrew Potter’s genius book of cultural criticism, Nation of Rebels. As our culture becomes increasingly focused on consumer choices as expressions of individuality rather than as ways to fulfill concrete needs, our purchasing decisions become increasingly symbolic. Much of that symbolism is political. Shopping at Whole Foods, for example, is a culturally liberal thing to do. But what, exactly, is liberal about it? Eating organic food does not use collective action to ameliorate socioeconomic inequality, nor does it protect individual rights from the demands of tradition and majority views. It kind of reduces the amount of toxic agricultural chemicals in the environment, but it does so in the least efficient way imaginable. If you really want to lower the quantity of pesticides in our groundwater, you should work with local organizations to put pressure on your congressperson to introduce regulatory legislation. Eating a certified organic apple will mostly just reduce the pesticide level in your own personal body.

Here, then, is the essence of lifestyle politics: it conflates personal choices with political action, shifting the realm of democratic engagement from the public sphere to the private. Wearing fair trade jeans certainly feels like doing something—after all, everyone else is wearing a symbol of the exploitative practices you oppose—but that something is microscopic compared to what you could accomplish by wearing regular Levis to a city council meeting. The enormous popularity of lifestyle politics symptomizes both an enduring truth of the human condition and a peculiar aspect of our contemporary culture: 1) it’s easier to buy things than to do things, and 2) almost everything has political connotations now.

Styrofoam is conservative, on the tenuous reasoning that it’s bad for the environment and Republicans are against environmentalism, mostly because Democrats are for it. Eating an organic tomato with a cardboard fork is liberal, because scrupulous attention to ethical consumer choices is environmentalist, even when it means burning thousands of gallons of gasoline to compost your disposable flatware. That both of these arguments are idiotic and yield almost zero concrete benefit—plus involve putting cancer in your mouth/spending half a million dollars, respectively—is beside the point. They feel similar to doing something, and that’s the whole point of politics anyway: to know, deep down, which side you’re on.