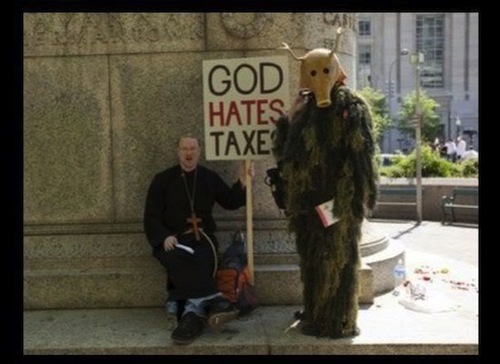 He also does not look like what you imagined, unless you are a second-century Celt.

Okay, so that headline is a little misleading: federal tax revenues are the lowest they have been, as a share of GDP, since before the Korean War. You know those checks that Don Draper gets and immediately turns into Cadillacs while poor people wait for Medicaid and the Department of Energy to be invented? He pays more taxes than you. Despite all the sorghum subsidies and porno art grants and million-dollar screwdrivers that have turned the US government into a voracious leviathan bent on devouring our children, the bites are smaller than they’ve been in two generations. Such news seems odd just now, since congresspeople have been describing their employer as a “gangster government,” and a whole national movement of incredibly angry old people has risen to protest our unjust tax burden. Oh yeah—we’re also going to shut down the government over our looming financial crisis. It’s the hottest legislative issue since we had to compromise and give everyone  a tax cut last year.

The disconnect between the message that we must lower the federal tax burden and the fact that “income tax payments this year will be nearly 13 percent lower than they were in 2008, the last full year of the Bush presidency” goes from bizarre to infuriating when we couple it with outrage over the deficit. A responsible body politic might respond to its fear of an unbalanced federal balance sheet by nudging taxes up a little from their lowest levels in five decades, but ours is not a responsible body politic. Instead, we demand that Congress and the White House balance the budget and cut our taxes. Also, we want ice cream, and everyone has to tell us we’re pretty but, like, really mean it.

Despite recently adopted good intentions re: objectivity, “we” in this sentence means “the Republican Party.” Their transition, over the holidays, from the party of tax cuts to the party of fiscal responsibility seems particularly venal in light of another of their favorite talking points, that roughly half of Americans pay no income tax. Anyone who watched Fox News or got into an argument on Facebook in 2010 was confronted with this piece of evidence, which Republicans cited mercilessly in their campaign to characterize the federal government as a tyranny of unions and Pell-granted college students over decent, hard-working Americans.

The “fact” is extremely misleading, since “half of Americans pay no federal income tax” makes an unstated distinction between income tax and payroll taxes like FICA. That lucky poorer half of America is still giving the federal government a large portion of their paychecks; they’re just not giving it a particular portion of that portion. But the intellectual dishonesty of the shorthand “half of Americans don’t pay income tax” pales in comparison with the sheer mendacity required to hold that proposition simultaneously with “taxes are too high.” Yet a significant portion of our electorate manages to believe both of these things so fervently as to liken themselves to Boston colonials.

The secret is to be completely retarded. For the last two years, one half of our political discourse has treated deficits and taxation as unrelated issues.*

The current deficit is unconscionable, even though we just lowered taxes again, and taxes are too high, even though they’re the lowest they’ve been in 60 years. Basically, we hate paying for stuff. It happens that we do so less than our parents and our grandparents, yet still we manage to understand ourselves as the victims of history. We’re clearly the victims of something, but lately we look less like the ravaged damsel and more like the werewolf. As long as we keep pitying her for her claw marks and pitying ourselves for waking up naked in the woods—but never, ever talk about those two things at the same time—we’ll probably be okay.