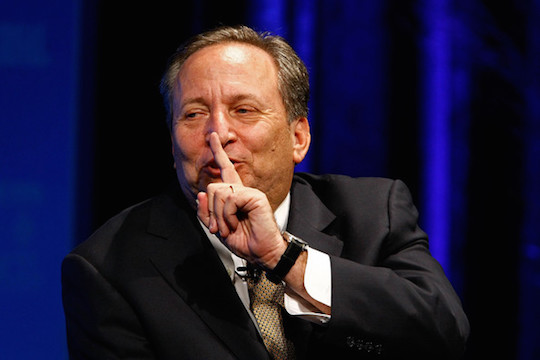 Former Secretary of the Treasury and gifted face-maker Larry Summers has calculated how much more middle-class households would make if the United States enjoyed the same income distribution it had in 1979, and the results are startling. According to his calculations, households in the bottom 80% of incomes would be making another $11,000 a year, on average, if we had experienced the same economy of the last 35 years without the growth in inequality. Households in the top 1%, on the other hand, would get $750,000 less. If you’re having a hard time wrapping your head around those two numbers, NPR’s Planet Money podcast has produced a helpful graph. Scroll down to see the whole thing—like six screens down.

Before we give ourselves to these numbers unreservedly, we should consider that Summers’ hypothetical world is probably impossible. It’s unlikely that we could experience the economy of the last four decades at 1979 income distributions, because the same forces that spurred growth also increased inequality. Technological advances that made person-hours more productive increased corporate profits even as they put laborers out of work. Globalization did much the same thing.

These two economic forces sound kind of evil when you put them that way, which brings us to another point in this discussion. Inequality is a freighted issue, maybe because rich people are greedy and maybe because talking about this stuff is communism. With that in mind, I’d like to set aside normative evaluations and talk about theoretical scenarios in which the present distribution of incomes might change.

One obvious way to do that would be taxes. When Summers implies that we can’t have present growth without present inequality, he means we can’t have it organically. We can do it on the back end, though. Unless you believe fervently in the Laffer Curve, one way to reduce income inequality without substantially altering the economy is to tax the top 1% of incomes much more and reduce taxes on the bottom 80%.

My thought experiment for you is to articulate a chain of political events in which that happens. In a kind of free-market democracy, where talking to one another and voting is the only way national decisions are made, “Proposition 1: 80% of people get $11,000 and 1% of people lose $750,000” is a foregone conclusion. Despite their big cash advantage in that scenario, the richest 1% of households would be hopelessly outnumbered at the ballot box.

Imagine if we were allowed to talk about it first, though. Let’s say instead of just voting on Prop 1, we first debated it for one year—on cable news, in the papers, and via whatever advertisements people wanted to buy. In this scenario, the richest 1% could leverage some of their cash advantage to mitigate their numerical disadvantage.

It so happens that he also has 70 times as much money. The stakes mean that the resource gap is compounded by an engagement gap; in addition to having more time and cash to pursue their political interests, the very rich also have more to lose, so they are more likely to get involved.

Now imagine that at the end of our year of debate, we don’t vote on Prop 1 directly. Instead, we will elect 600 or so representatives, who will then vote as a body on Proposition 1, a ground invasion of Iran, and whether gay men should be forbidden from owning very small dogs.

The estimated cost of campaigning to become one of these representatives is oh, I don’t know, $1.6 million. Roughly 80% of households can’t afford that, so support from the 1% is pretty much indispensable to anyone who wants to be a representative. And if one of those candidates is a gay Pomeranian groomer with family in Iran—well, maybe he could reconsider his position on Prop 1.

I lay out these scenarios because they explain how we arrived at a system that so vertiginously benefits a few at the expense of so many. The functional outcome of Citizens United v. FEC and other changes to campaign finance law has been to shift us away from the first scenario—a perfect democracy that never existed in America because you can’t run a country that way—and toward the last scenario, a republican system that expresses democratic will perhaps too imperfectly.

Our present distribution of incomes did not happen to us. We made it. We could unmake it if we wanted to, but only under certain definitions of “we.” If “we” means “everybody, equally,” then income redistribution is inevitable. But “we” are not all involved in politics, and certainly not equally. That’s the whole point.