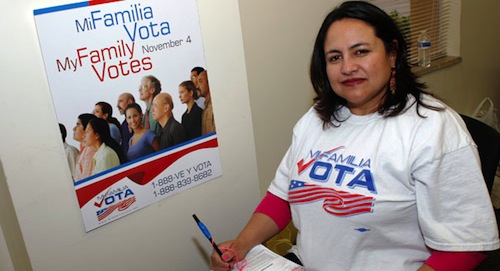 Good news for anti-fraud crusaders and racists, both of whom happen to be Republicans: a study by the Advancement Project estimates that new voter ID laws could prevent as many as 10 million legitimate Latino voters from casting ballots in the November election. If you hate primary sources and, paradoxically, second sources, Fox Latino has you covered. Meanwhile, judges heard closing arguments yesterday regarding a South Carolina law that would require voters to show one of five forms of voter ID at the polls.

Both the South Carolina law and similar laws in other states were sponsored by Republican legislators, which is totally unrelated to their disproportionate effect on students, the elderly and minority voters. And for a bonus coincidence, True the Vote—an organization that has sent “observers” to polling places in black neighborhoods across the country—grew out of a Texas Tea Party organization. Still, even though South Carolina was not able to document one example of fraud during its hearing, the recent crusade for ID checks is not political.

It’s racist. At issue in Monday’s hearing was an email sent to SC Rep. and author of the voter ID law Alan Clemmons (R–Myrtle Beach,) in which a constituent opined that it was “garbage” to claim that “a poor black person or an elderly one” would have a hard time meeting the requirements. If the state offered $100 with a voter ID card, the email said, such people would rush to get them “like a swarm of bees going after a watermelon”—to which Clemmons responded “amen.”

It’s too bad, because all these coincidences paint a picture of a Republican Party that is abandoning the basic principles of electoral democracy. It’s one thing to obstruct the legislative branch and precipitate a national credit downgrade and spend millions in casino money on campaigns of misinformation to make people dislike Obama. It’s another to try to enshrine in law mechanisms that will disregard what 10 million people like or dislike. Unable to accept the legitimacy of the Obama presidency, the Republican Party has set out to ensure that no election is legitimate ever again.

Again, that’s not what the spate of GOP-sponsored voter ID laws are designed to do. That is their practical outcome, though, and disenfranchising 3% of the US population by race is an outcome that demands a very good explanation. So far, that explanation has not been forthcoming. There were almost certainly cases of voters misrepresenting their identities in the 2008 and 2010 elections, but we don’t know about them. We do know that 25% of African-Americans do not have government-issued photo ID.

To a reasonable legislator, the prospect of disenfranchising a quarter of the black population would demand proof of significant fraud to make any ID law a net positive. But the Republican Party of 2012 appears to be short on reasonable legislators and long on savvy politicians. The 2012 GOP does not need evidence of fraud, because for them fraud is the only plausible explanation for what happened in 2008.

It is not possible that America picked a black lawyer to be president instead of a white war hero. It cannot have happened because the the party had just seated one of the worst presidents in American history, or because their war hero ran a staggeringly inept campaign, or because their increasingly radical platform appeals to a rapidly dwindling constituency. All of those explanations would require a GOP that has decided its ends justify any means to consider that it might be fallible.

Better to declare the election of 2008 wasn’t real, and to take steps to ensure that 10 million people who are likely to want Barack Obama to be president can’t impose their illegitimate wills again. Don’t get me wrong: I think conservative politics has a lot to offer the United States, especially now. I question the value of a party that would invest so many resources in a national campaign to fight voter fraud, however, when we have almost no evidence that it exists. Imagine what the Republican Party could accomplish if it addressed a real problem. Imagine how many votes that would get them.