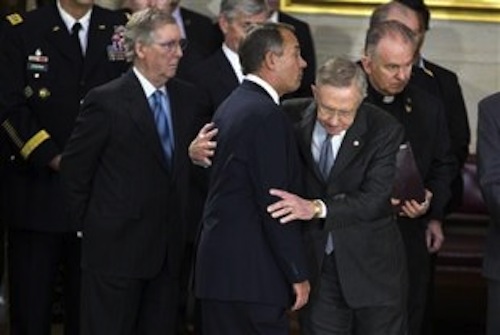 We must distribute the blame equally. Republicans have refused to compromise on their insistence that taxes not be raised on the highest-earning households, and Democrats have refused to compromise on their refusal to give Republicans everything they want. A sensible person might observe, here, that the result of not compromising—tax increase on everybody, sequestration—is worse than the worst-case scenario either party might achieve through negotiation. Congress may be composed of sensible people, but it is does not behave as one.

A famous psychological experiment gives the subject ten dollars and asks him to propose a division of it between himself and another person. If the other person does not accept the proposed division, nobody gets any money. Most people will propose $6/$4, with the balance comprising $5/$5 and $7/$3 splits. Persons with autism are overwhelmingly likely to propose $9/$1. They do not understand why the other person consistently refuses; after all, $1 is better than nothing.

Since Speaker Boehner’s ugly setback last week, House Republicans have remained adamant in their offer of $1. At least publicly, they cannot understand why Democrats do not prefer it to no deal at all. One suspects that privately they have misgivings. Even the most deeply-steeped Tea Party congressman must recognize that letting taxes go up on everyone—and suffering the general pillory that will accompany it—is worse than letting them go up on 2% of households, right?

Right—if he were the only one voting for that. As a member of a caucus, however, no one House Republican has much incentive to do anything but establish his conservative bona fides. To some degree it was always thus, but it’s worse now. As the oracular Nate Silver explains, the proliferation of very safe congressional districts has made primary challenges more dangerous to incumbents than general elections. In so-called “landslide districts,” an indiscretion so trifling as throwing the country back into recession is not enough to cost a Republican his seat to a Democrat. Negotiation with the hated socialist tyrants of the other party and/or moderates of his own, on the other hand, might cause him to lose it to another Republican.

It’s an ugly situation, and it thwarts the purposes around which the lower house of Congress was designed. Lockstep caucus coordination plus perennial safety for one party or the other makes two-year terms irrelevant; a growing number of House seats are operatively lifelong appointments. What does it matter who occupies them if their occupants reliably vote as a bloc?

There is reason to believe that the fiscal cliff will not actually be so bad. Taxes do not fall due until April, and once inaction has raised taxes on everybody, Congress can lower them on most people without fear of the Norquist sanction against tax hikes. Sequestration can similarly be undone before its effects are felt. Going over the cliff will startle the markets and likely further reduce confidence in US debt abroad, but it probably won’t wreck the economy and unleash demons to gratify themselves upon the children of the earth.

It will not speak well of the United States Congress, though. This week’s failure of the legislative branch to do anything is the culmination of a long process of failing to compromise, putting off and then failing again. Remember the budget supercommittee Congress created to overcome its own intransigence? Remember the sequestration that committee scheduled to force Congress to reach the compromise that it could not? Here it comes, and here we are. Say what you will about the apportionment of blame and the actual severity of our self-imposed penalties: Congress is not working. It keeps setting goals—goals that do not turn on any outside bodies or problems or events, but merely on its own ability to make a decision—and it keeps failing. The legislative branch cannot exert its own will. Imagine what could happen if it were called upon to do something extraordinary.