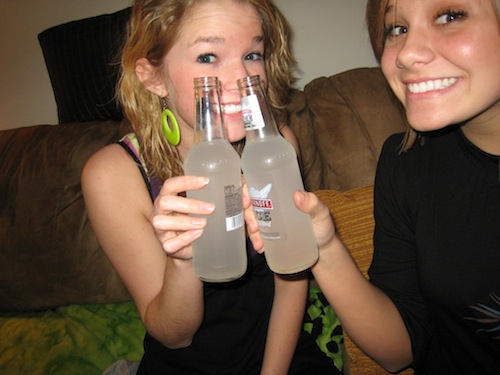 Because I am very old, I read the New York Times in order to keep up with various social trends. It’s a little like reading Madeleine L’Engle to keep up with developments in contemporary physics: one encounters compelling stories, if not reports of, you know, this world. Tuesday, the Times turned the tables on its old adversary reality with this article about icing, which suggests that the trend—of which actual evidence exists, for once—may itself be artificial. It’s a Times trend piece in reverse: the people doing it believe in it, and the newspaper thinks it’s made up. But I’m getting ahead of myself. The reader not wearing flip flops and a khaki visor may ask, what is icing? To which I reply: take a knee, bro.

Icing is a practice definitely not invented by the makers of Smirnoff Ice, by which a person presented with a Smirnoff Ice malt beverage must get down on one knee and drink it all without taking the bottle away from his mouth. To be confronted in this way is to be “iced.” The only way to protect oneself from being iced is to already have a bottle of Smirnoff Ice on your person, which you can then present to your would-be icer, who must now drink both. The whole process is explained on the website BrosIcingBros.com, which also definitely has nothing to do with the Diageo bottling company.

I personally have not ever consumed a Smirnoff Ice, but everyone I have talked to assures me that it tastes like a Zima with Pez in it. As the Times points out, the only reason to not believe that Diageo is behind the game is that it seems to be predicated on the experience of drinking a Smirnoff Ice being pretty awful. Presumably, that’s what makes it a game; when executed with other alcoholic beverages, the practice of icing is simply called “giving.” Of course, there is also an element of subterfuge involved.

Anyone wondering if Smirnoff Ice and drinking in general are bad for you should consider the protagonist of this video, who looks like he’s about 30. Icing as a phenomenon seems to be endemic to college-aged males in fraternities, which makes sense when you consider that A) they live in close proximity to one another, B) they are likely to consider alcohol not just a leisure drug but a challenge, and C) they can interrupt whatever they’re doing and pound a drink without suffering any serious consequences. Everyone in this video looks like those kids who explain American race relations to Borat in Borat. They are bros, but more importantly they are bros organized into distinct groups with budgets and stuff.

The fraternity connection suggests that icing is the product of corporate influence. Some genius marketeer could easily have explained icing to the Pi Kappa Alphas of UNC and presented them with several cases of Smirnoff Ice to expedite the game. Then again, he might have just done the second part, and the first emerged when they were all sitting around trying to figure out what to do with it. At this point, there’s no way to know, unless you think that representatives of a large corporation would respond honestly to a direct question. Executives at Diageo have denied any involvement with the game. Everyone who believes that raise your hand. It doesn’t matter that I cannot see you.

The problem of knowing whether icing is real or not quickly gives way to the question of whether that matters. I personally will not be participating in icing either way, so the whole thing is kind of academic, but that’s what we do around here. Presumably, we want our fads to be homegrown. Dancing on a flagpole or pounding a malt liquor drink because it’s gross is a fun expression of absurdity when we all just decide to do it. If Germany tricked us all into dancing on flagpoles in the twenties it would have been a different phenomenon entirely.

This visceral impression leads to a more paradoxical analysis. If icing has arisen Just Because, it is a testament to a fundamentally unguided society, where certain things happen on a very large scale, encompassing many lives, for no reason at all. Weirdly, we find that preferable to icing happening for a deliberate, human, and arguably kind of productive reason. If we’re icing one another anyway, wouldn’t it be better if we were doing it because some clever fellow at Diageo was sufficiently market-savvy to save his failing beverage line?

In theory, yes, but of course in actuality no. The prospect of icing being a viral marketing campaign is frightening because it calls into question, um, everything else. As the audience for print, radio, television and other outlets for traditional advertising withers, we are increasingly confronted with viral marketing. There’s a reason we don’t call it “everybody gets together and agrees it’s fun marketing.” The premise of viral marketing is that we are exposed to it involuntarily through what we used to think of as our normal lives. Icing and similar phenomena prevent us from drawing a bright-line distinction between the experience of advertisements and authentic experience. That’s terrifying, not least because it suggests that we may have been working with a false dichotomy in the first place. If we don’t know where icing came from, what else don’t we know?