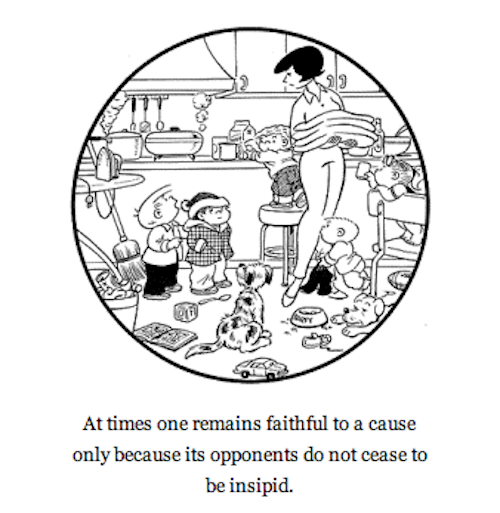 The image above comes from The Nietzsche Family Circus, which randomly pairs aphorisms from the German philosopher with drawings from the, um, insipid comic strip. You should check it out, provided you want to spend 40 minutes refreshing your browser and giggling uncontrollably. The NFC is an excellent example of the Kuleshov Effect, by which unrelated elements necessarily take on meaning in their juxtaposition. The Kuleshov Effect is why film editing works, and why young Billy/Friedrich Nietzsche seems to have perfectly articulated Thel’s existential despair above. It’s also the guiding principle of today’s link roundup, which features items from around the web united in their I saw them this week, but which seem to take on a vague, ephemeral narrative as a group. Sit back, crack open a beer (be sure to cough over the sound if you’re at work) and enjoy the fundamental human impulse to create meaning.

Yesterday we talked about the inversion of the classic trend piece that was the Times’s report on icing. By contrast, Slate’s article on the sudden prevalence of striped clothing is an archetypal I-guess-it-could-be-happening example of the form. “With shoppers eschewing plastic bags in favor of L.L. Bean totes, the nautical reference integrates the accessory,” writes Troy Patterson, presumably with some intuitive sense of what the hell that might mean, “giving the wearer an air of the intrepid and also connoting a refined and active leisure (as opposed to lazy luxury.)” If there is a geometric pattern that conveys the message, “I am not lazy,” more explicitly than stripes, I’d like to know about it.

If you think Patterson overstates his case, check out the ABC News headline “Cat Parasite Affects Everything We Feel and Do.” I’m not yet convinced that toxoplasmosis is the determinist force to replace god and free will in modern life, but researcher Kevin Lafferty makes a compelling argument for its influence on human behavior. Then again, he might have just found a hilarious way to generalize about the kind of people who own cats. “Research has shown that women who are infected with the parasite tend to be warm, outgoing and attentive to others, while infected men tend to be less intelligent and probably a bit boring,” ABC says. “But both men and women who are infected are more prone to feeling guilty and insecure.” Finally, science has given us a tool with which to understand Jon Arbuckle.

In a column connected to cats only by the Kuleshov Effect, Charles Blow reports that, for the first time, a Gallup poll shows more than half of Americans consider “homosexual relations” morally acceptable. Let’s just pause to let that sink in, and to remember to laugh openly at the phrase “moral majority” from here on out. Now that we’ve experienced a moment of smug satisfaction, let’s extend it with the knowledge that the shift was driven heavily by men over age 50, whose acceptance of homosexuality has gone up 26 points since the last poll. I formally withdraw my theory that the cure for socially institutionalized homophobia is old people dying. Apparently it’s actually my dad renting Brokeback Mountain.

Don’t worry, though—ours is still a dauntingly unjust society. I’m clearly biased by my employment history, but this article from the Onion pleased me enormously. If you’re not familiar with the network of inherited privilege that governs New York City, most of this article is not really satire. There’s frankly only one thing better than this sort of scathing indictment of real life, and that’s real life itself. Here’s a 13 year-old girl saying “cunt” on the Today Show.