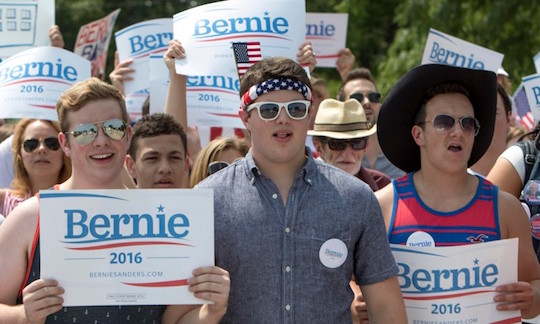 That’s the only evidence of this phenomenon Mashable offers. Cahn embeds five other tweets and several quotes complaining that Bernie bros are out of hand, but they’re all from political columnists or people who have publicly endorsed Clinton. They agree that sexism and online harassment from bros who love Bernie is a big problem. Mashable just couldn’t find any evidence of that problem by press time.

Buzzfeed totally found some evidence, though: that Mashable story. Friday night, the news site/kitten GIF aggregator ran this story, headlined The Bernie Bros Are A Problem And The Sanders Campaign Is Trying To Stop Them.

“Mashable posted a ton of screenshots of Bro attacks Friday morning,” Evan McMorris-Santoro writes. By “ton” he means two, and by “Bro attacks” he means one woman and one joke. As further evidence, he also cites but does not link to an essay by “progressive writer Joan Walsh.” Quote:

In her essay, Walsh described [Bernie bros’] “fascinating and stunningly sexist reactions” to her support for Clinton and wrote it was especially tied to the fact that her daughter is a Clinton staffer. Her daughter also gets hit with sexist social media trolling by accounts purported to be run by Sanders supporters, Walsh said.

I’m going to stop you at “daughter is a Clinton staffer,” Buzzfeed, and say your source may not be reliable. But the website formerly known as Time Magazine snapped this story right up. Last night, it ran a piece headlined The Spirit of the BernieBro Lives On. Perhaps frustrated by the difficulty of finding actual Bernie bros, Charlotte Alter makes a classic trend-piece move and covers the reaction to the coverage:

The BernieBro has faded somewhat online. But some Hillary Clinton supporters say the sentiment behind the over-the-top Sanders supporter is alive and well in real life.

What does that first sentence mean? Have examples of this phenomenon we all know about been erased from the internet? If it never actually existed online, how is the sentiment behind it “alive and well” in real life? It seems like you’re saying that even though it’s not there, people still believe in it, but I can’t tell. The meaning of the second sentence is clear, though: Clinton supporters agree Bernie supporters are dicks.

Alter acknowledges this reading later in the story. “Some are even questioning whether the BernieBro is real at all,” she writes, “suggesting it could be a bogeyman invented by pro-Clinton journalists.” But she doesn’t interview any of those “some.” Instead, she quotes six different Clinton volunteers.

On the eve of the Iowa caucuses, the votes are in: Clinton supporters agree that people who support Sanders are terrible. They are bros. They are sexist and condescending, and if you try to tell them to vote for Hillary—perhaps as part of a cold call or maybe just after class—they disrespect you. The Bernie bros are completely out of hand.

Either that, or Mashable, BuzzFeed, and Time are dumb. With no evidence, they declared that supporters of one candidate were overwhelmingly the same type of awful person, and then they asked supporters of the other candidate if it was true.

The Bernie bro narrative sits at the corner of pro-Clinton bias and bad reporting. It’s an instance of egg-manning by professional journalists across multiple publications, and it stinks. Your job isn’t to tell me what kind of people Hillary supporters think Bernie supporters are. Your job is to help me make a decent choice for president of the United States of America, before we all become Dumpster Dudes and Medical Bankruptcy Babes. We can do better.