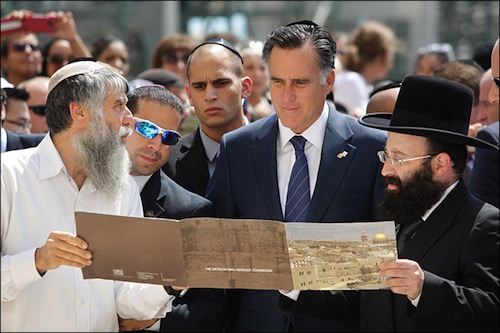 Dorks from around the world

I’ll admit it: I did not think Mitt Romney was going to be a funny candidate for president. In a primary season that gave us Herman Cain, Newt Gingrich and Rick Santorum, it was hard to see Romney as anything but the wealthy dowager who hires the Stooges to move her piano. How wrong I was. Fresh from his passive-aggressive tour of London, Romney went to Israel to praise the beautiful per capita income—so much nicer than what you get in Palestine. He attributed this discrepancy to “the power of culture and at least a few other things,” presumably making a praying-exploding gesture with his hands, before adding that it might also be “providence.” He was a hit in Poland.

Later, the Romney campaign explained that its candidate’s remarks were “grossly mischaracterized.” After all, he went on to note the same discrepancy between the United States and Mexico, Chile and Ecuador—basically anywhere the rich are separated from the poor by armed border guards, you get that cultural difference. He also referred to Jerusalem as the capital of Israel, but that was probably just some weird Mormon stuff.

1) Could Romney be doing this stuff on purpose? At the same fundraising dinner where he described Palestine’s cultural failure to overcome export blockades, he sat next to Sheldon Adelson, the very pro-Israel casino magnate last seen giving out millions of dollars. There’s nothing a rich Israel hawk likes better than to hear that the problems of both poor people and Palestinians are their own fault. It’s also worth noting that the one thing Mitt Romney will never apologize for is America, unlike certain not completely white presidents, as this tour of foreign insult makes clear.

2) At this point in the campaign, it is safe to say that Romney is running on his economic expertise. He is the clever businessman who started with only wealth and turned it into a fortune; Obama is the back-rubber who can’t figure out how to fix unemployment. When the Republican candidate for president ignores trade sanctions, military occupations, discrepancies in natural resources, export blockades and narco-terrorism to chalk up differences in per capita income to “culture,” it undermines the claim that he understands the economy. I do not want this man stocking the Fed.

It sounds like what Romney understands, deeply, is the narrative that it is better to be rich than to be poor, and therefore rich people are better than poor people. Probably, he does not think Palestinians make one tenth as much money as Israelis because they are lazy. Probably he knows that the Palestinian economy operates under a 40-year military occupation just as well as most people. But he also knows that the fundamental creed of today’s Republican Party is that culture—not import/export ratios, not early access to education, not the money supply, not tax structures or regulation—determines who gets rich and who doesn’t.

That’s the story the GOP is sticking to, because it’s the only way to justify the party’s policies. If you admit that there is something more pervasive than lazy single mothers affecting the economy—something like a series of tax cuts for the people least likely to spend them, or investment banking roulette—then you admit that we can do something about it. That is not the Republican strategy. Why would they do something about an economy that has so manifestly benefited the Sheldon Adelsons?

The beauty of “the power of culture and at least a few other things” is that the government can do nothing about them. Granted, we can make abortion illegal and crack down on the non-stop party that is single motherhood, but that will not really change anything—not the way that, say, raising the top marginal tax rate by 3% and using that money to fund infrastructure improvement would do something. That would address our economy at a level more concrete than quote-unquote culture. It would also involve some kind of sacrifice for Romney’s backers.

No—better to pretend we don’t know how an economy works and chalk up problems of poverty to the way poor people are. It’s cultural; as everyone knows, virtually all poor people have less money. They’re lazy. All they want to do after they get home from their jobs is watch TV; they don’t go on vacation or train dressage horses or build a concrete wall along the Green Line or anything. If only they would get off their asses and invest, maybe send their kids to college and get them involved in gubernatorial politics, America would have a lot more rich people. Damn our laggard culture.