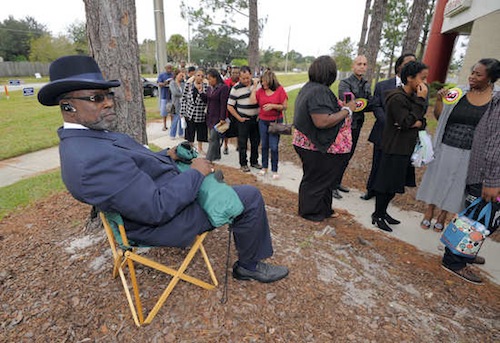 Only one week until the election—have you gone insane yet? David Brooks has; today in the Times, he argues that given Republican intransigence, the best way to ensure bipartisan reform is to elect Mitt Romney. Brooks’s bold ideas for the future always involve universal Republican governance. He can be forgiven his quadrennial hysteria, however. Not even the candidates themselves know who’s winning—or if they do, they ain’t telling. Both the Obama and Romney campaigns have declared victory in the general election and unquestioned dominance of several swing states, where their own spending is going to work and the other guy’s is a sign of desperation. It kind of puts the voter in an odd position.

Here’s David Axelrod on the absolute clarity of facts in this election:

I don’t want to be ambiguous about this at all: We’re winning this race. And I say that not on the basis of some mystical faith in a wave that’s going to come. We base it on cold, hard data. In just eight days, we’ll know who was bluffing and who wasn’t.

That’s reassuring new for those of us who would like to see the president win, if for no other reason than watching the American people declare a millionaire governor’s son more relatable than the child of a single mother in the midst of a recession would explode our brains. But that’s editorializing. Here’s a spokesman for the Romney campaign on why their guy is winning:

The Obama campaign continued with their desperate and flailing spin in an attempt to explain why suddenly states that were never considered in play are up for grabs. We’ve said all along this election is a choice between the status quo and real change—change that offers promise that the future will be better than the past.

Beeson cites Bill Clinton’s multi-state tour of the Midwest and renewed Obama spending in Pennsylvania as evidence that the president’s campaign is desperate. He also claims that the Romney campaign has “said all along” that this election is about change, when that slogan appears to have emerged in the last two months. But that’s not important right now. What’s important is that both candidates for the presidency claim to be objectively winning, and that is not possible. Given this disagreement over facts, the voter is forced to consider two eventualities:

Option (1) initially seems the most likely, but really it is only the most palatable. Let’s say that somehow Team O and Team R have access to different sets of polling data, even though all the reputable polls market themselves to both sides. In this hypothetical, what is the likelihood that each campaign happens to have selected the polling data that shows it to be winning? If there were two sets of information at work here, the odds each camp arbitrarily choosing the data that predicts its own victory are 1 in 4. So take your willingness to believe that national polls and prediction instruments all disagree and divide that by four; that’s how much you believe Option (1).

Option (2) seems far more plausible, and it is also depressing in the extreme. One week before the election, our presidential candidates—or one of them, anyway—is willing to lie about facts. Moreover, they are doing so in a situation where lying seems to be of very limited utility. It’s maybe a good strategy to falsely claim advantage in a primary, where people are more likely to vote the candidate they think has the best chance of winning. But in a binary election, where the outcome is decided by individuals’ personal opinions about whom they like better, tricking people into believing you’re going to win is nearly useless. It’s like sidling up to a woman at the bar and telling her she wants to buy you a drink.

Of course, lying about who’s winning becomes a much more valuable strategy if you plan on stealing an election, but that’s too depressing to contemplate. Let’s assume that no one plans to defraud the American electorate except by regular lying. It is not heartening to see that strategy reach a fever pitch in the last week. Somebody here is desperate, and desperate people turn to the tool they know best. We don’t know who it is, but at least we can be certain that the tool is deception. There’s you choice, folks.