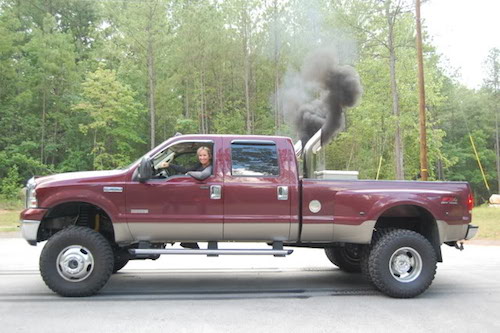 A Ford Powerstroke diesel, modified to produce extra smoke for the normal-penised gentleman

The problem with internet journalism is that you never know whether you’re reading about a thing that is happening all around you or just hearing an echo. Case in point: “rolling coal,” the practice of modifying a truck to force extra fuel into the engine and produce billows of black smoke. Much like the knockout game, it is either a thing that jerks across the nation are doing because they hate the environment, or a legend we’re embracing because we consider ourselves victims of a world gone mad. Rolling coal is news or hysteria. It started with this article in Vocativ, which Dave Weigel wrote about in Slate on Thursday, causing everybody to write about it over the weekend.

I first encountered the rolling coal story in Business Insider via the demon Facebook. Since we’re talking about either a real phenomenon or the degeneration of internet journalism, let’s take a moment to consider the prose of BI correspondent Hunter Walker—not to be confused with my friend and grad school classmate Walker Hunter. Here’s Hunter Walker’s lede on the rolling coal story:

Pickup trucks customized to spew black smoke into the air are quickly becoming the newest weapon in the culture wars.

Already we’re in a battle of cliché versus sense. You cannot become the newest thing; if something is newer than you, you’re not going to eventually leap into existence after it did, even if you become quickly. Hunter’s refusal to think about what he is saying becomes more prominent two sentences later, when he writes, “These modifications are not new.”

Walker is apparently not concerned about whether rolling coal is a trend or just something outrageous he became aware of by reading Slate, but we should be. Is this an important recent event that tells us How We Live Now, or is it some Mazes & Monsters bullshit?

Thanks to YouTube, one person who makes a video of himself rolling coal can be seen by 55,000 people. That’s kind of like 55,000 people seeing instances of coal rolled, except it’s not. The internet dramatically increases the number of people who are aware of something that happened, which amplifies our perception of how often that thing happens. But all we’re doing here is multiplying witnesses, which is not the same as multiplying instances.

So is rolling coal real or not? Anecdotal evidence is useless here, both for the reason mentioned above and because internet journalists keep using the same anecdotes. Hunter cites “a roller named Ryan,” who is the high school senior working at a South Carolina diesel garage that Elizabeth Kulze quotes in the Voactiv story. That story contains a grand total of two sources, the other being a dude named Robbie who works in the same garage. Weigel’s Slate version includes those sources, plus a guy who sells smokestack modification kits in Wisconsin and explains that truck drivers don’t like Obama. None of these people has a last name.

So how about hard evidence? By “hard evidence,” I of course mean information from Facebook, where approximately 16,000 people have liked pages about rolling coal. That seems like a lot but, by comparison, over 60,000 people have liked farting. It’s almost as if Facebook likes, along with Instagram comments and Tweets, are less a measure of how many people are doing something than of how intensely it is trending on the internet.

So perhaps the answerable question here is not “is rolling coal real?” but rather, “why are we suddenly worried about rolling coal?” By “we,” I mean liberals who have the internet. Fox News has no rolling coal piece; assuming you count Slate and BI as liberal sources, the story is confined to left-leaning news and lifestyle outlets. HuffPo is all over this one. Something about this story has captured the minds of liberals and environmentalists across the country, and I submit that it is because rolling coal captures the fundamental dilemma of contemporary American politics.

Air pollution is a collective action problem. Individual drivers can outfit their trucks to spray a rad amount of smoke into the air, but then we all have to breathe that air and watch acid rain dissolve the Statue of Liberty. Rolling coal is a personal freedom with an externalized cost.

It so happens that such problems define the present liberal-conservative divide. As with the freedom to never buy health insurance or to own a gun that can efficiently kill schoolchildren, the parties disagree on how much the individual should get to exercise his liberty at the expense of society. What’s worse, as soon as we come up with a plan to work together to reduce the number of us who get shot and pass our emergency room bills on to society, a bunch of idiots make it their identity to not play along.

For the environmentalist, the individual is winning—stupidly, selfishly, ultimately to his own detriment. When Weigel’s salesperson remarks, “You want clean air? Well, screw you,” those of us who care about the atmosphere hear the proud idiocy of a self-destructive society. It seems like everyone is doing that, and we enlightened few are powerless to stop it. But we’re not powerless, and they’re not all doing it. A few hicks are dumb, as they always have been. The rest of us have more important work to do than finger our rage.