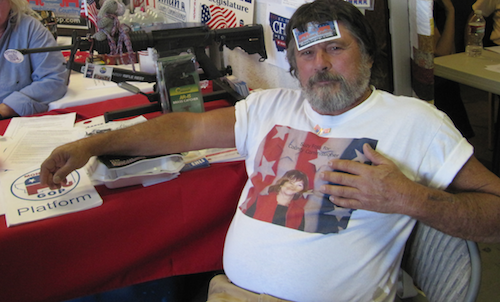 Before we get into that, I would like to point out that there are some hilarious email addresses on and around the Ravalli County Republican Central Committee. “Skibumin1@yahoo.com” saves on consonants while still getting its message across, whereas “nballance@aol.com” achieves the opposite effect. Meanwhile, “theresa@willingservants.org” is just creepy. (Good news: it’s a horse rescue. Bad news: it rescues them for slaughter.) But that’s kind of unfair. Just because you share an email address with your wife or misspelled “ski bummin'” does not mean you are dumb or crazy.

You might be one of those things, however, if you sign off on the Montana GOP platform. Party platforms are notoriously shrill; it’s generally the true believers who attend statewide conventions, and the resulting documents tend to reflect their fervor. The Tea Party has left its mark on the Montana platform. For example, its preamble contains this bold assertion:

Republicans believe that the Constitution is as relevant today as it was on the day it was ratified. It is not an evolving, ever-changing document.

I mean if it were, it would have a bunch of amendments at the end, right? This year’s GOP platform reflects the Tea Party’s tendency to approach the Constitution as a quasi-religious text, infallible in roughly the same way as the Founders themselves. The preamble establishes an ideological bent right from the beginning, insisting that the party “subscribes to a set of principles that transcend specific policy issues” and that these principles “derive directly from the wisdom of America’s Founders.”

Combat! Kids: beware the politician who believes that ideas are more important than laws and who grounds his authority in the wisdom of dead people. He has a plan for you. The Montana Republican platform seems to be planning a swift return to the 19th century, as evidenced in the following planks:

Inflation: We stand against federal money policy being established by the Federal Reserve and stand in support of constitutionally defined money.

States’ Rights: We agree with Thomas Jefferson and James Madison, who stated that the U.S. Supreme Court does not have the sole authority to judge the constitutionality of federal laws. We hold with these men that the States not only have the right, but also the duty to nullify unconstitutional laws in order to protect their citizens.

Right to Bear Arms: We affirm that the right to bear arms is a right the people of Montana have reserved for themselves, individually, from interference by government agents and government employees. We oppose any restrictions on the type or number of firearms any law-abiding citizen may own or possess…We strongly defend the Montana Firearms Freedom Act and the prosecution of any government agents violating that law.

The Montana Firearms Freedom Act was struck down in Circuit Court last year, and the Supreme Court has refused to hear an appeal. All three of the planks above run counter to at least 50 years of federal jurisprudence, but that’s the point. To borrow a phrase from earlier in the platform, these principles transcend specific policy issues—even principles like nullification, which has been a dead letter since the Jackson administration.

Again, though, that’s how a party platform works. It is to actual governance as the Lord’s Prayer is to Thanksgiving dinner: a declaration of belief that will guide the proceedings in theory but doesn’t have much to do with how the turkey gets carved. Probably, no document Montana Republicans produce this year will be as conservative as this one.

That’s why you don’t make your candidates sign it. Ideological purity is a big issue in Republican politics right now, particularly in Montana. The ultra-conservative wing is battling so-called “compromise Republicans” for control of the party, which is entertaining to those of us who lean left but probably not, from a neutral standpoint, good for anybody.

Pat Connell is right not to sign a loyalty oath. The Montana GOP is not going to win elections by pandering to people who would never vote Democrat anyway, and the Republican Party is not going to govern better by becoming even more orthodox. Principles may be more important than policy at the convention, but it’s the actual business of government that matters to voters.