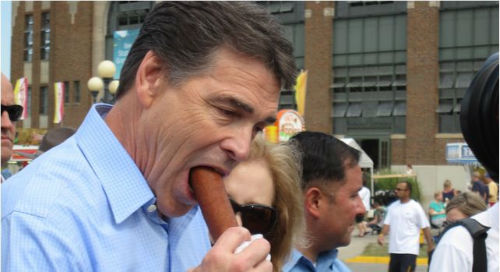 "Whole country's so bolloxed up I can't even enjoy this uncritically."

The Iowa caucuses are less than a month away, which means it’s time for candidates for the Republican nomination to demonstrate whatever bona fides might appeal to a rural, right-leaning state that also loves education and farm subsidies. It’s kind of tricky, to tell you the truth, but Iowa conforms to the template of contemporary conservatism in at least one way: church people. The state is bursting at the Crocs with evangelical Christians. That’s good news for Rick Perry, whose professed religion is the one part of his campaign he has not yet screwed up. If Newt Gingrich somehow makes himself unlikable between now and then, a victory in Iowa might breathe new life into Perry’s bid. If only he could find some completely safe issue that appeals to religious voters but doesn’t require him to remember anything about policy or events. If only. Video after the jump.

For those of you who cannot watch videos at work, here’s Governor Perry’s message to Iowans:

I’m not ashamed to admit that I’m a Christian, but you don’t need to be in the pew every Sunday to know there’s something wrong in this country when gays can serve openly in the military but our kids can’t openly celebrate Christmas or pray in school. As President, I’ll end Obama’s war on religion. And I’ll fight against liberal attacks on our religious heritage. Faith made America strong. It can make her strong again. I’m Rick Perry and I approve this message.

First off, if you are the one speaking you don’t have to say that you approve your message. Second, kudos to Rick Perry for possessing the unmatched bravery to admit he is a Christian. If more people had Perry’s courage, we could finally push the number of professed Christians in the United States above that paltry 76% of the population. But outnumbering members of all other religious faiths and nonbelievers at a 3 to 1 ratio is no guarantee of religious liberty. If you don’t believe me, just look at the present state of this country, where kids can’t even openly celebrate Christmas.

Barack Obama’s war on religion has been executed so subtly that we didn’t even notice the black-jacketed police knocking children off the laps of mall Santas and pepper spraying carolers. Like a magic eye picture or the image of Christ in a piece of toast, you can only see it from a distance, when you empty your mind and stare for several minutes without focusing your eyes. Then the startling double standard coalesces from the fog of current events. If freedom of religion means Christian bigotry against homosexuals can’t be the basis of US military policy, how come that same freedom of religion means public schools can’t require Christian prayer? It makes no sense. Freedom of religion dictates that when people who aren’t Christians get to make a law, Christians get to make one, too.

But the Obama administration has blatantly ignored what’s fair, and it’s their breed of liberal social engineering that has reduced American Christianity to a mere three fourths of everybody. Fortunately, those few Christians who are left posses the courage of their convictions, and men like Rick Perry aren’t afraid to make their religion a public issue, even if it means alienating all but 75% of the electorate. Perry’s fight will be a difficult one, but he still has some allies left in this brutally anti-Christian society. For example, the scrappy little most popular news network in the country.

Even in the midst of the government’s war on religion and our secular society’s relentless attacks on anyone who admits they love Jesus, Fox News has the courage to report dangerous truths. And I quote: “Perry’s declaration immediately resonated with millions of Christians around the nation who believe their faith is under attack and who’ve been waiting for a Republican presidential candidate to have the candor and moral fortitude to stand up and articulate why we are truly the greatest nation on the face of the Earth.”

If there’s one statement more dangerous for a presidential candidate than “I am a Christian,” it’s “America rules.” Only a few people have the moral fortitude to tell Americans that America is great and admit to the most Christian nation in the world that they love Jesus, too. It takes a penetrating mind to realize that ideas like patriotism and children’s love for Christmas—always controversial, but now the subject of a deliberate attack by a powerful black person—might appeal to voters in Iowa. They said he was crazy when he wanted to admit his abiding love of God and country on television, but they couldn’t hold him back. Like all Christians, he’s likely to suffer for his beliefs, but Rick Perry is a man of principle.