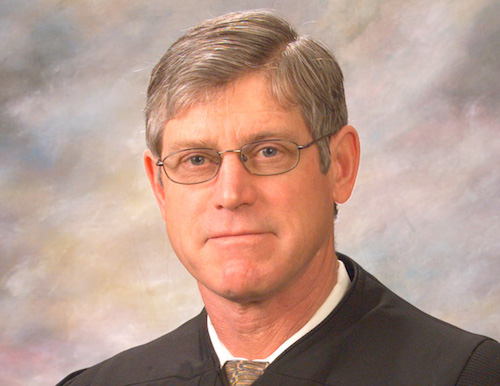 Let us note that Allen definitely did not impregnate herself. Haynes probably meant to use the less glaring but equally dishonest phrase “got herself pregnant,” which she also did not do. Allen had vaginal intercourse with a man, and together they got her pregnant. That this man has not been indicted or even mentioned in connection with her case is one of several reasons why it is unfair to charge pregnant women who use drugs with child endangerment.

The Montana Reproductive Rights Coalition knows some other reasons, if you care to think about them. The most obvious one, though, is that babies tend to experience better health and developmental outcomes when their mothers are not in prison.

If convicted, Allen is looking at a mandatory minimum sentence of five years. Ravalli County already seemed to be on shaky ground when it claimed to protect the welfare of her fetus by charging her with endangerment. Now that we know it denied her attempt to seek treatment so that it could try to imprison her first, its veneer of concern for hypothetical children is even thinner.

I invite you to read the transcript linked above, just so you can see the extent of Haynes’s and Deputy County Attorney Thorin Geist’s complaining as they agree that they shouldn’t have to reschedule a trial just so a pregnant woman facing drug charges can get treatment for drugs. Haynes has weighed the difficulty of changing his schedule against a child spending the first five years of its life with no father and a mother in prison, and he has decided in favor of his schedule.

That’s one reason to believe that Ravalli County is not as concerned about Allen’s unborn child as it pretends to be. Another reason is the chronology of charges against her. Allen’s attorney told the court that she was pregnant in the August 21 status hearing, when he requested a postponement for drug treatment. Geist charged Allen with felony endangerment the next week, after she failed a drug test. So the timeline looks something like this:

August 21: Allen’s attorney tells the court she is pregnant and asks to reschedule her drug trial so she can enroll in inpatient treatment. Judge Haynes refuses, lecturing from the bench about how people use children to get out of criminal charges.

This sounds crazy, but maybe Allen wouldn’t have failed that drug test if the court had let her check into rehab. In its haste to punish her, Ravalli County set up the conditions for her to reoffend. By keeping her out of treatment, the county helped expose her fetus to THC and opiates one more time, then slapped a felony charge on her for endangering it.

Who is served by this course of justice? Not Allen: she got denied admission to drug treatment so she could make her court date, then caught another charge for being pregnant while she took drugs. Not her child, either: instead of getting born to a free mom who has completed treatment, he’ll be a prison orphan for the first five years of his life. And not taxpayers: Judge Haynes has prevented a drug addict from getting treatment so she can stay in jail at county expense, then spend five years in prison on the state’s dime while Ravalli pays for the care of her unparented child.

I can’t help but notice that if Allen had done all the same things without getting pregnant, she would be in a lot less trouble with the law. And if she hadn’t caught that child endangerment charge, Allen’s kid would have a much better life. The sole winner here is Ravalli County, which will finally contain one fewer 21 year-old who gets high. They only had to ruin two lives to do it.