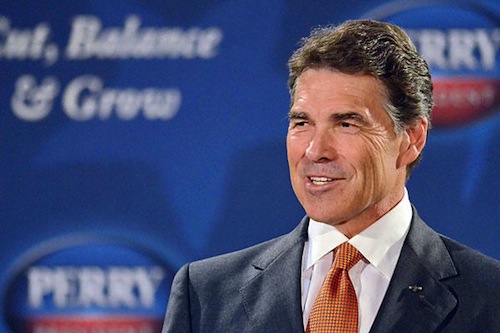 It was a classic story of the cruelty implicit in the American dream: Rick Perry, born son of struggling ranchers and once a serious contender for President, is now reduced to being the millionaire governor of Texas. His meteoric rise A) lasted about a week and B) only made his fall more vertiginous—and all for the simple crime of never knowing what he was doing. Perry has formally withdrawn his candidacy for the Republican nomination and, in one last act of electoral incompetence, instructed his followers to support Newt Gingrich. That’s like your dog running away and, as he goes, suggesting that you play fetch with the microwave. In a completely unrelated story, it turns out that Rick Santorum actually won Iowa.

Imagine for a moment that you are one of the tens of Americans who supported Rick Perry. Put on Toby Keith if it helps. Now cast your mind to the qualities that made him so magnetic to you: his take-charge demeanor, his evangelical convictions, his earnest (read: stupid) charm. Perry is a Real American in the Palin/Bush mold. Which one of the remaining candidates seems the most tough/pious/real? Is it the other guy from Texas, who believes that most of the federal government is illegal? Is it the ultra-religious son of Pennsylvania coal miners? Or is it Newt Gingrich?

If you were to arrange the candidates on almost any sort of spectrum, Perry and Gingrich would be at opposite ends. Before Perry left the race, there were two small-government Texans, two evangelical Christians, two governors and one grotesquely swollen baby with a PhD. Gingrich offers qualities no other candidate can, because he is literally the biggest piece of shit in the world. Perry seemed to acknowledge as much in his endorsement, which didn’t exactly ring:

Newt is not perfect, but who among us is? The fact is, there is forgiveness for those who seek God. And I believe in the power of redemption, for it is a central tenet of my Christian faith.

Remind me not to let Rick Perry speak at my wedding reception.*

Technically he didn’t. Technically nobody won Iowa, since the same recount that found Santorum had gotten more votes also found that results from eight precincts were missing. Even that discovery is just frosting on an ambiguity layer cake, since the Iowa caucuses are not binding anyway. But the fact remains that Santorum threatened Romney where Gingrich did not.

Whether he could win the nomination is anybody’s guess. I guess no, along with pretty much everybody else, on the grounds that even the 2012 Republican Party is not so spiteful as to send a man to the generals with the single-plank platform “Bible.” Iowa has the oldest population of any state in the union. Santorum’s particularly focused bigotry might play there, but for the GOP to stake its hopes to replace Barack Obama on opposition to gay rights would be suicide. But we are not talking about the generals. We are talking about the last political will and testament of Richard Milhous Perry.

Presumably, he wants his supporters to do the thing he said for them to do. That his chosen directive is the statistically least likely thing for his supporters to do is a fitting capstone to a campaign whose architecture was fakakta from the start. I will miss Rick Perry, because his strategy and execution were consistently hilarious. At least he left with the girl he came in with.