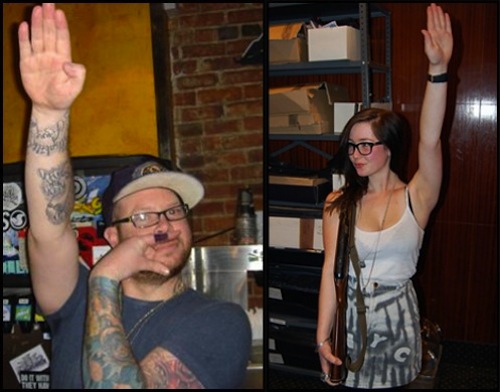 There is something wrong with Matt Pearce’s brain. I know because I read his article in the Los Angeles Times about hipster racism, which is apparently now a real thing. By real thing, I mean imagined thing reported extensively as an epiphenomenon of our own awareness of it. If that sounds maybe kind of abstract, it’s because it totally is. Educated young people are still racist, but hipster racism is an abstract noun modified by a made-up adjective. It’s like when you try to read a clock in a dream: the closer you look at it, the blurrier it gets. Consider the lead paragraph of Pearce’s article:

The Trayvon Martin case, the”Kony 2012″ phenomenon, the L.A. riots anniversary…The conversation about race in America never went away. Now a new discussion about so-called hipster racism has brought the talk to the millennials, and it’s gotten a little awkward.

You can really keep peeling back the onion on that particular paragraph, but the first few layers are enough to make you cry. For example, how is “the ‘Kony 2012’ phenomenon” part of the conversation about race in America, except that it involves a black person? Kony isn’t even American, and the anniversary of the LA riots is hardly a conversation. Pearce has supplied a verbless list to support his contention that the conversation about race in America never went away, and all the things on his list happened this year. Avengers, Dark Knight Rises, that one where Andy Samberg is Adam Sandler’s kid..Movies never went away. This philodendron, my sock, a copy of Visit From the Goon Squad with “ass!” written on it…my apartment never went away. Try it—you can do that with anything.

That sentence is wack, but at least it’s recognizable; it replicates the experience of conversing with someone who started talking before they thought about what they were going to say. The second one is pure meaninglessness. Beware a sentence in which the direct object is a synonym for the subject. When Pearce says that discussion of hipster racism has “brought the talk” to the millennials, he grafts an empty construction onto a buzzword. Then he declares that “it’s,”—”it” being his möbius-strip talk-bringing discussion, apparently—”gotten a little awkward.” And a wave of empty nouns crashes against the catchphrase.

So Matt Pearce can’t think. He can type a series of words that sound like journalism, but like the parrot, he cannot mean. He seems to know which cultural signifiers go together, but his constructions suggest that he has memorized them phonetically:

If all this sounds insular and obscure, that’s because it is—think Brooklyn or Logan Square in Chicago—except to the black or Asian or Native American millennials who find themselves on the other side of a race gap that never really disappeared after their parents grew up.

hipster stuff is insular and obscure, so “all this” is therefore like those neighborhoods. If you’re not sure what “all this” is, exactly, you’re not alone. Even though he knows he’s talking about all of it, “this” remains vague in Pearce’s argument. He seems to be referring to the incorporation of race-baiting within the same iconographic system of white-trash hipstery that includes trucker caps and PBR—also something called “kill whitey parties.” That seems to be just one party—and I’ve got five bucks says Pumpsta is related to someone who works at the Washington Post—but that doesn’t matter, because now we are in a realm of pure imagination. It’s all very insular and obscure, in the sense that you can’t prove any of it isn’t happening.

The most insulting aspect of this article/montage of trend-journalism memes, however, is its central conceit: finally, thanks to hipster racism, young Americans are thinking about race. They’re not like Generation X, whose nuanced understanding of racism crystallized when “Power of Equality” came out. Milennials are coddled and naive, so they’re just now becoming aware of the defining social issue in American history:

But for America’s mostly liberal, cosmopolitan-minded and frequently jobless millennials, the impetus for the latest wave of discussion came from a few hiccups over the new HBO show “Girls,” the brainchild of 25-year-old Lena Dunham, who is white.

I asume “frequently jobless” is in there because most people talk about race at work. Matt Pearce is a man who believes that an entire generation recently started thinking about race because of Twitter comments regarding an HBO show that aired last week. He reports the news to you.