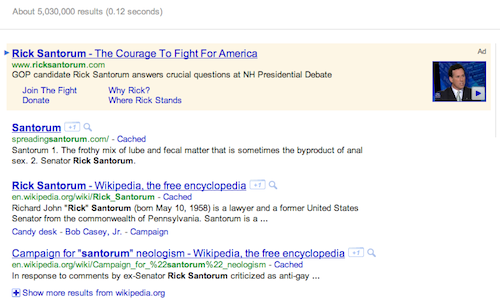 Google search results for "rick santorum"—note that the top result is a paid advertisement, and that the neologism is beating the original.

In all the chanting for death and keeping promises to seniors, we lost track of the other exciting development from the CNN Tea Party Republican Debate. Wolf Blitzer fielded questions from Twitter, one of which asked the candidates what they were doing to attract the Latino vote. Before Herman Cain could angrily shout whom?, Rick Santorum jumped on it:

Santorum is doing the same thing to attract Latino voters that he’s doing to get votes from outside his personal church: nothing. When I first read this quote in print media, I assumed his “illegal—I mean Latino—voters” was a snide jab. Now I’m not so sure. We are talking about the man who, at the first Republican debate, said that if—when!—Rick Santorum becomes President, “the world as we know it will be no more.” Whether he just said illegal already and had it in his cache memory or was deliberately conflating ethnic identity with false citizenship, Santorum can be forgiven, because he was pursuing the objective of the debate: messing with Rick Perry.

Rick Perry is totally winning the campaign for the Republican nomination, probably because he is the person who is most like Mitt Romney while still—and this is critically important—not being Mitt Romney. Shudder. Candidates who have absolutely no hope of winning said nomination are free to pursue their own interests. Ron Paul can issue high-frequency laments for an America that only he remembers. Herman Cain can calculate mean-value particle momentums of various quantum waveforms in his head. Newt Gingrich can eat dicks, and Michele Bachmann can remain on standby mode until it is again time to attack Rick Perry. Here’s how you do it:

As governor of Texas, Rick Perry signed an executive order requiring young girls to get vaccinated for human papillomavirus. For those of you who have not dated Ben Fowlkes, HPV is a sexually transmitted disease that presents few symptoms but dramatically increases the likelihood of cervical cancer. As a disease affecting the parts God hates anyway, cervical cancer is one of the least bad kinds. Also, HPV is a sexually transmitted disease, which means that A) to try to prevent it is to endorse the existence of sex and B) the young girls vaccinated against it have to get the injection in their vaginas. It’s science.

Officially, though, Perry’s willingness to vaccinate against a thing that might prevent people from having sex is not the issue. It’s that he achieved this fairly significant public health milestone by executive fiat, ordering the people of Texas to get vaccinated rather than strongly encouraging them to do so using morsels of their precious freedom. Obviously, the government has no right to make kids get vaccinated for diseases. The American principle of individual freedom means that I can contract polio and give it to other freedom-loving/vaccine-hating Americans, until eventually there are enough of us that we as a democratic majority can give polio to everyone else.

Disease prevention is a collective action problem. That the Republican candidates for President universally derided Rick Perry’s solution is a testament not just to their hatred for the former governor but also to their crazily limited sense of what government can do. If they don’t believe that government should require vaccinations against disease—a situation in which individual choice geometrically affects collective well-being—it’s hard to imagine which collective action problems they think government should solve. Fires? Traffic at intersections? If you judged by these debates, you would think that the only legitimate function of government for the Republican Party is protection of property.

That’s the other prong of the Perry HPV fork. It so happened that, at the time of his executive order, the only maker of the HPV vaccine was Merck—a company that donated to his campaign and employed his former chief of staff. Perry dismissed Bachmann’s allegation that his vaccination order was a reward for Merck, saying that $5,000 was an awfully cheap sum to be bought for. Actually, it was more like $30,000, plus the hundreds of thousands Merck gave to the Republican Governors’ Association while Perry was chair. The RGA is one of the Perry campaign’s biggest donors now, and it’s worth noting on general background that the man became a millionaire while he was governor of Texas. However he conducted his tenure in office, it was the most personally profitable thing Rick Perry has ever done.

The financial malfeasance angle seems to be the one Bachmann is working now, as her campaign moves inevitably into spoiler mode. As often happens with the GOP, though, the ostensible controversy masks the real one. Had Governor Perry ordered vaccination against H1N1, we probably wouldn’t be having this discussion now. But who can say? It’s a horse race between which crazy belief the Republican field holds more tightly: that we shouldn’t try to prevent STDs, or that the government can’t make anyone do anything.