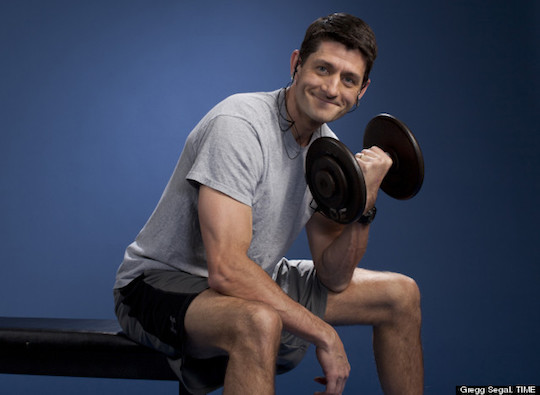 Speaker of the House Paul Ryan released a Spotify playlist yesterday, as part of a promotion between the streaming music service and members of Congress whose details we do not understand. Was it a paid endorsement? Or are American lawmakers promoting a foreign company for free? It doesn’t matter. What’s important is that we analyze Ryan’s musical tastes right now, before he has a chance to change them. Here’s his tweet:

People always ask, “What music are you listening to?” Find out → Check out my Spotify playlist: https://t.co/r2bOym97Gk

You can follow that link for the Spotify playlist, or go right to it here. Spoiler alert: it doesn’t contain any Rage Against the Machine, which Ryan claimed to love in 2012 and then walked back from in 2014. He’s gotten into new stuff since then, like “Enter Sandman.”

The overall impression from Ryan’s Spotify playlist is that it is the work of someone who doesn’t care about music. He opens with “Under Pressure,” which is a rookie move. Like “Nightswimming” and “Hey Jude,” “Under Pressure” is one of those songs that people who make a lot of mixes discipline themselves to never use. Mixes are for gems, not mountains. But Ryan’s Spotify playlist cleaves to the hits.

It contains “Gimme Shelter,” for instance—not just a Rolling Stones song, but a Rolling Stones single. I’m all for putting “Midnight Mile” near the end of your summer mix, but as a general rule, you should not make playlists from songs you regularly hear on the radio. The whole point of a playlist is that it is personalized. To make a mix of radio jams is to suggest that you lack interiority.

But this is the perspective of the music aficionado, not the waiting-room listener. If you haven’t really explored what’s out there, “The Distance” by Cake seems more like a quirky song you like and less like a ubiquitous irritant from 1996. Since the invention of cassette tapes, the radio has been for such people—people who want to hear music in certain situations, like the gym, but don’t consider listening an activity unto itself. The big disadvantage of radio for listeners with particular tastes is that it chooses songs for us based on what most people like. But that’s an advantage for listeners like Ryan.

“The Spirit of Radio”1 is on his list, but probably not because he’s thought deeply about radio’s essential project and decided to endorse it. It’s probably because he wants to rock out at the gym. If you ignore the utter momentum-killer that is “Rocky Mountain Way,” this mix has a distinctly gym-y quality to it. It starts slow but inspiring and gradually builds to upbeat and flexing. If we consider “Sure Shot” the end of the first upbeat part, we’ve got almost exactly 15 minutes of slow stuff (warmup/stretching) followed by 21 minutes of cardio. Then it’s off to lift weights.

Here our gym theory crashes on the rocks of “Maybe I’m Amazed.” It just doesn’t make sense at all—in any context, really, but especially not at the gym. Maybe it was his wedding song, and he puts it on every playlist. Maybe he’s a member of the theoretical species of people who don’t like the Beatles but do like Wings. Or maybe he just didn’t think anyone would listen this far.

This possibility raises an important question: did Ryan make this playlist himself? Almost certainly not, right? I ask because the last song is titled “White Liar.” Probably it’s just a Miranda Lambert jam he likes. But maybe a Spotify employee is having some fun.

But the song on this mix that drives a dagger through my heart is “Wagon Wheel.” It’s the Darius Rucker cover and not the original that we all love and find personally meaningful since 2004. Of course Ryan likes the version from Hootie, which is exactly the same as the original but with slicker production and no rough edges on any of the vocals. It makes it so different.

That’s the worst thing about this playlist: it is not very different from something I might like. Many of these songs are all right with me, including “Bittersweet Symphony” and “Sure Shot.” Cross out Rush, Joe Walsh, and Darius Fucking Rucker, and the remaining tracks are at least inoffensive. They are also generally recognizable from my adolescence.  I would never listen to this playlist again, unless you put it in a jukebox with five other congresspeople’s playlists at the gym. Then I’d probably pick it. It’s terrifying to think that the difference between my musical tastes and those of Ryan, a person I’d consider my aesthetic opposite in many ways, come down to minor distinctions. But here we are, more similar than we want to be. Discovering this playlist is like meeting an android version of yourself: just similar enough to be disturbing, void of real feeling, but probably indistinguishable to anyone else in a way that is existentially terrifying.