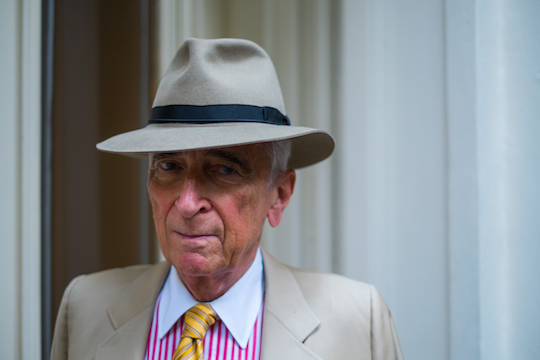 Two weeks ago, octogenarian and pioneer of “new journalism” Gay Talese answered a question badly at a Boston University conference. Poet Verandah Porche1 asked him what women had inspired him most “as writers.” After repeating the question to confirm it, Talese answered:

You can read the Times article linked above if you want to catch a few drops of the morality storm. Talese has since said that he misunderstood the question—he thought Porche was asking which women writers influenced him when he was young—and listed several of his generation he now admires. But the damage is done. We’ve identified the sexism in his opinion, and we can now be the opposite of sexist by calling him out.

So call him out we must. At the Washington Post, deputy editor Melisa Bellack has written a personal recollection headlined I was Gay Talese’s teaching assistant. I quit because of his sexism. Bellack quit “a few classes into the semester” after Talese asked her to make him a cup of tea. That’s an arguably sexist thing to ask a woman to do, although Bellack notes that Talese often mentions his stint “getting coffees [and] running errands” as a copy boy at the Times in 1953. Maybe he thinks that’s what assistants do. And an assistant—even a teaching assistant—might consider such slights the price of admission. Bellack, however, considered it symptomatic of Talese’s disrespect. Quote:

Yet whereas in his writing he seems so perceptive, of his surroundings and the human experience, when I met him in person he seemed totally consumed with himself and uninterested in listening to or engaging with what anyone else had to say. (Several other students dropped the class for that reason.) He seemed to lack the curiosity of most reporters I know. At the time, it made me wonder how much creative license is in his creative nonfiction.

I take issue with this paragraph. First of all, it is dirty and in no way justified to imply in the last sentence that Talese made up facts for his stories. Nothing in this incident speaks to his credibility. Second, are you telling me that this 40-year veteran who revolutionized American nonfiction wasn’t interested in what students had to say? Go on.

I think it’s cool to talk to students and engage with their ideas, even if you are a giant in your field. I probably think that because I am not a giant in my field. If anyone has earned the right to dismiss journalism students out-of-hand, it’s Talese. Maybe, if you are an aspiring writer, you should go ahead and make him that cup of tea. He went from an apartment above his parents’ dress shop in New Jersey to teaching a class at Penn. You went from the house of your successful doctor parents to taking a class at Penn. Perhaps Talese did not treat you as his equal because you weren’t.

I don’t mean to chastise Bellack, who can’t control her background and was clearly hurt by this experience. I do mean to chastise the attitude that holds up Talese for scorn on the internet, though.

In the panoply of shared American values, “don’t be sexist/racist/homophobic” is arguably the newest one. We’ve pretty much just figured that out. Plenty of good people of Talese’s generation are bad at exercising it, because their formative years happened before it was widely adopted. That doesn’t mean their behavior is right, but it also doesn’t mean it’s right to pillory them. Talese’s embarrassing misstep has given a lot of people occasion to perform their moral superiority to him, and that should embarrass them.

The internet shouldn’t just be a mob. The people who are tearing into Talese deserve respect, because they’re people. But not one of them has written anything as good as Frank Sinatra Has a Cold. Call me an elitist, but I think that entitles him to a little forgiveness—maybe even deference.