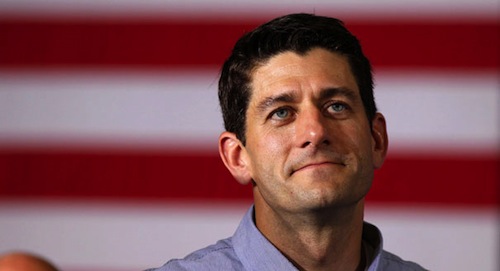 As a hip, modern American, I have come to accept a baseline level of mendacity in my political candidates. I’m fully inured to Orewllian doublespeak, for example. When the House passes a bill specifically to prevent tax increases on people making over a million dollars a year and calls it the Buffett Rule Act, I smirk grimly and move on. Every once in a while, though, some elected figure manages to lie in a way that makes me actually angry. Despite my jaded exterior and desire to focus on cat videos, I am occasionally overwhelmed by that rage which comes when a smug person attempts to deceive you by offering to help. Yesterday, Paul Ryan got me. Video after the jump.

I am not angry about the fatuous claim that Ryan just doesn’t understand the president’s “horses and bayonets” analogy. I’m not even angry at the willful misreading when he says that “to compare modern American navy and battleships with bayonets—I just don’t understand that comparison.” That is the sort of intellectual dishonesty up with which I have learned to put. What got me were his remarks about “defense cuts,” elaborated later in the interview:

What we also disagree with was on the defense policy. This trillion-dollar cut in defense will devastate our defense. It will make us weak. It will project weakness abroad. And I think Mitt Romney did a great job of contrasting that.

The “trillion-dollar cut in defense” to which Ryan refers is the sequester—the series of automatic cuts to defense and social spending that will take effect at the end of the year unless Congress passes a deficit reduction plan. President Obama does not want those cuts. The sequester was put in place as a punishment to ensure that the budget supercommittee would reach an agreement; no one wants those cuts, by definition. The only people who might remotely be construed as advocating a trillion-dollar defense cut as part of the sequester are the congresspeople who voted for it. Paul Ryan was one of them.

Go ahead and watch the video in that link if you want to see Ryan put on his innocent face again. It’s the wide-eyed, generally surprised expression he adopts when he tries to make people agree with him by deceiving them re: facts. It’s the same face every time, because he practices a lot.

I submit that there are two categories of sins in American politics. Let’s call them venial and mortal. The venial sins reflect poorly on the people who commit them, and they degrade the quality of public discourse. When Nancy Pelosi says that she knows something awful about Newt Gingrich that she will tell everyone later, she makes politics a little more fallacious and petty. Such ad hominem arguments are venial sins; they distract us from what our leaders—and, by extension, our democracy—intends to do. They make politics into a sort of reality TV series, and that is bad.

The mortal sins, by comparison, strike at the efficacy of democracy itself. When George W. Bush insisted that Iraq had weapons of mass destruction, he urged the American people to make a decision based on false information. He didn’t appeal to our baser nature, like Pelosi; he straight-up tricked us. That is a mortal sin, and to do it enough is to kill American government. A democracy where people choose based on wrong information is no democracy. Such a government is representational in the same way that a prison inmate who dreams he is climbing Mt. Everest is free.

Paul Ryan’s lie about the “trillion-dollar defense cut” was a mortal sin. He went on TV and told everyone that his opponent proposed what he himself voted into law, and he urged people to vote for him based on that information. He did so in response to a question about the distinctions between his own ticket and his opponents’, for Pete’s sake. There is no plan behind that behavior beside the desire to trick people, to make them choose a president who they think supports their own ideas but who, in fact, does not.

You can’t run a democracy like that. There is no point in choosing our leaders if they spend their campaigns trying to misinform us about who they are. Such a strategy asks for the authority of democracy without offering any of the justice. It is anti-American in the most fundamental way, and it is wrong.

Paul Ryan is a liar. He lied about his marathon times, and he lied about cutting a trillion dollars from the national defense budget. You will know the liar by his contempt for the people around him. You will know him because he consistently overestimates how well he is believed. You will know him by his smug face, and periodically you will want to punch him in it. Don’t do that, though. Just wait until November, and prove him wrong.