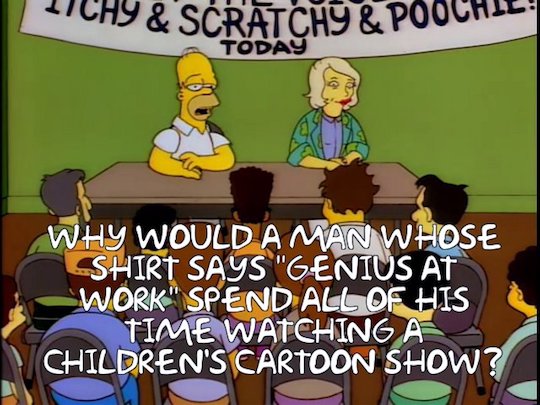 I went to high school with a genius. In daily life, he offered scant evidence that he possessed a beautiful mind. But we knew he had a 165 IQ, because he kept telling us about it. Whenever he failed a math test, and once when someone corrected his pronunciation of Michaelangelo’s famous Sixteenth Chapel, he reminded us of his giant brain number. “That’s on a test,” he would say. “Not just an estimate.” We wondered whether he was simply lying or if his parents had told him in some irrevocable mistake. If that wasn’t it, then somewhere in town there was an educational psychologist whose license needed revoking. We loved to talk about this question.

What is it about the self-identified genius that makes such a ripe figure for comedy? Ignatius J. Reilly. Wile E. Coyote. Pinky and the Brain. These characters are not funny because they’re stupid.1 They’re funny because they mistake themselves for exceptional when they are ordinary—an act that is itself fairly ordinary, and therefore pleasing. We all experience moments of astonishment at our own intellects, usually right before we do something stupid. The self-proclaimed genius is funny because he takes these moments as compelling evidence, something most people are too smart to do.

So we are pleased to learn that in London, a judge has rejected the arguments of equity fund executive Randy Work, whose divorce petition demanded more than half the assets he shared with his wife due to his outsized contributions as a “financial genius.” Judge Holman responded:

I personally find that a difficult, and perhaps unhelpful, word in this context. To my mind, the word “genius” tends to be overused and is properly reserved for Leonardo da Vinci, Mozart, Einstein and others like them…A successful claim to a special contribution requires some exceptional and individual quality in the spouse concerned. Being in the right place at the right time or benefiting from a period of boom is not enough.

Readers who lived in and around New York City circa 2007 will be forgiven for smirking as they read. I met a number of finance dudes in that time and place who identified themselves as geniuses.2 None of them was of subnormal intelligence, but I wouldn’t say they were da Vinci types, either. The thing they had in common was not especial cleverness but a tendency to mistake competence for rare talent. They seemed to be afflicted by a confidence endemic to their field. I believe the events of the following years support this theory.

The collapse surely contributed to finance bros’ reputation for being dummies who thought they were geniuses. But part of the problem was also that they set the bar too high. When you tell people you’re a genius, your mistakes become comedy. Any act that falls short of brilliance proves you are an idiot. This is an impossible standard, but it’s your fault for saying you were a genius. A smart person would never do that. If you were really a genius, the smart thing would be to insist that you were ordinary and let people marvel at your hard work.

This approach has more or less been the preferred route of American satirists from Twain to Norm MacDonald.3 They adopt the persona of the wise hick—the ignorant clod capable of flashes of insight—because you emphasize how smart you are by playing dumb. Playing smart emphasizes how dumb you are. It is for third-person characters, not narrators.

The failure to recognize this principle may be what’s funny about our current president. He is one of those dummies who proves he’s smart by talking about it. He reflects a business culture that has become sure of its own genius. You don’t hear dentists going on about how government should run like a dental office, or architects saying it should run like a construction site. Only businessmen believe that every endeavor should take on the same shape as their lives. With the possible exception of artists, they seem to be the only professionals in society who know how to do everyone else’s jobs.

But I suppose you’d have to put pundits in that category, too, and actors while we’re at it. The more you think about it, the more contemporary life feels overrun with geniuses. Maybe we live in gifted times. History suggests another explanation, but who are we to know?