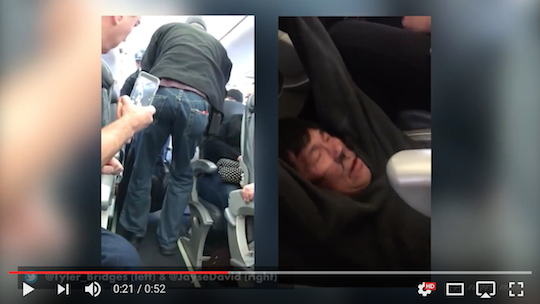 So, viewer discretion is advised on this one, and it’s advised by me. There’s a grown man screaming, which is disturbing. There’s also one of those people with the kind of voice certain strangers seem to possess—particularly strangers on planes—that makes you want to take up the worship of whatever god might strike them dumb. Anyway, here you go:

I’m the guy who, upon seeing police knock out a nonviolent middle-aged man at the behest of United Airlines, tells them they are doing a good job. I’m also the dude in the orange shirt who sits quietly while these events unfold in the row behind him. Both these people are me. But most of all, I am the United spokesperson who has to make all of this sound normal and, if possible, good. That’s a job of work, and yesterday’s four-sentence statement strains to accomplish it. Let’s go sentence-by-sentence:

Flight 3411 from Chicago to Louisville was overbooked. The active-voice version of this sentence would read “United overbooked flight 3411 from Chicago to Louisville.” That’s who controls how many people get booked on United flights. Also, many reports suggest this was not a typical overbooking scenario. According to the person who posted the video above, the airline was bumping passengers in order to accommodate a United flight crew that needed to be in Louisville the next morning. Fortunately, the construction “was overbooked” removes United from this situation entirely. Thanks to careful syntax, the word “United” does not appear anywhere in this statement, as though this whole thing were just something that happened on one of their planes, somehow.

After our team looked for volunteers, one customer refused to leave the aircraft voluntarily and law enforcement was asked to come to the gate. This sentence is awesome. The process that begins with asking for volunteers ends with someone’s unconscious body being dragged off the plane. The word “voluntarily” takes on a complicated meaning in the context of compulsion by force. When this man refused to leave voluntarily, “law enforcement was asked to come to the gate.” Who asked them? We cannot know. How did “come to the gate” turn into “drag someone screaming from the plane?” Also not clear from this sentence, whose job is not to convey information but to desperately reframe things the reader already knows.

Further details on the removed customer should be directed to authorities. This sentence was written by a person whose brain shut off in order to protect itself. It probably started out as some promise that further details were forthcoming, or that further questions should be directed to authorities. Note that in this situation, the realm of authority does not include the company that owns this plane, sold this man his ticket, and hired these guys to pull him off. If you want to know what happened to the person last seen being dragged unconscious down the aisle of a United plane by United security, don’t ask United. Ask the authorities.