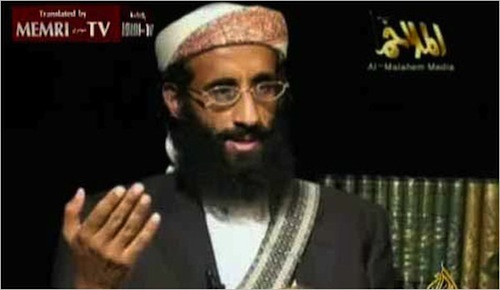 On Friday, the CIA successfully executed a drone attack against Anwar  Al-Awlaki, killing him and fellow Al Qaeda operative Samir Khan as they rode through Yemen in a car. Khan was the editor of Al Qaeda’s weird English-language magazine Inspire, which is like US Weekly if US Weekly were entirely about murdering people. “Make a Bomb In the Kitchen of Your Mom” was the headline of one recent Inspire feature. Awlaki is a radical preacher whose anti-American rhetoric was believed to inspire numerous acts of terrorism. Both men are American citizens. Awlaki was born in New Mexico, and Khan—raised in Queens and North Carolina—is of Pakistani origin. If you believe that Elvis was an accident, the two men are now the first American citizens to have been assassinated by the CIA. Khan appears to have been a bonus, but President Obama put Awlaki on a kill list at the beginning of last year.

There is little question that both men were serious douchebags. Awlaki is believed to have helped plan several terrorist attacks, including the unsuccessful attempt to blow up a jet bound for Detroit in 2009. Khan edits a damn magazine about terrorism. And both men were traveling with the Saudi bomb-maker Ibrahim Hassan al-Asiri, who built the underwear device credited with the glorious destruction of Umar Farouk Abdulmutallab’s nutsack. Between the underwear bombing and the Highlights-style graphic design of Inspire, Awlaki was clearly the most effective Al Qaeda operative in the car. But the fact remains that A) he was an American citizen and B) the phrase “believed to be” appears in front of everything that he did.

That seems like a technicality, until you consider that the same CIA who believed Awlaki masterminded a series of terrorist attacks also believed he was dead for much of 2009. If our intelligence services could not at one time accurately discern whether Anwar al-Awlaki was walking around and breathing, it’s hard to take their assessment of his role in various secret plots with absolute confidence. In the same way we know that Samir Khan loves Photoshop but is maybe not so good at it, we know that Awlaki loves violent jihad and maybe had something to do with making it happen. He definitely produced a series of speeches and pamphlets. Maybe he planned terrorist attacks. He is currently one with the universe/a melted 1986 Mercedes, so we can’t really know.

What was not in doubt about Awalaki was his citizenship. He was an American, even if he was the extremely bad kind of American who devoted his life to convincing other people to commit murders. Here is a fun question: if what we know for certain about Awlaki—the speeches and the close association with Al Qaeda—were all that was true, how would we feel about the President having him killed? Let’s say that we knew he liked terrorism and talked a lot about how great it was but did not actually plan any himself. Let’s say also that, instead of living in Yemen, he broadcast his speeches from Toledo. How would you greet the news that your tax dollars exploded his car?

I submit that, from a Constitutional standpoint, we don’t know much about Anwar al-Awlaki beyond the foregoing hypothetical. His views were reprehensible, but the US government does not kill its own citizens for holding reprehensible views. At least, it didn’t. As of Friday, we sort of kill people for holding reprehensible views, but only when we’re also pretty sure that they committed a bunch of crimes, which is not something we have to prove in a court because they’re in a foreign country and the crimes were motivated by the views anyway. Awlaki was probably a terrorist. He definitely liked terrorism. Now he’s dead.

It does not seem like an enormous transgression today. Maybe the President stepped over the line, but it’s not like he’s going to be black-bagging librarians in Kansas for reading Mein Kampf. As Miracle Mike Sebba recently pointed out to me, though, now we have a precedent. Fifty years from now, when we are really sure that an unpopular American is probably planning crimes, historians can cite a reason why it’s okay to kill him. In 1789, the United States of America drafted a constitution that gave all citizens the protection of law and the right to a fair, public trail. Two hundred twenty-two years later, we still do not violate that Constitution, except when we’re really sure we need to. After all, Americans are people like anybody else.