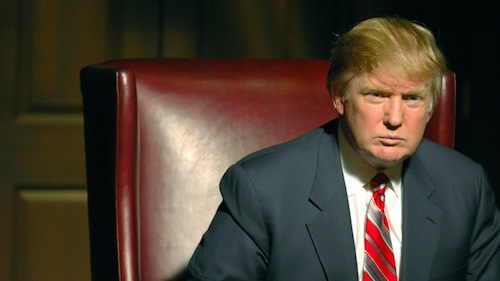 "All right, but if I'm gonna put my name on this thing, I want it to be (expletive) classy."

Good news, you guys: “Newsmax Media and ION Television are moving forward with The Newsmax ION Television 2012 Presidential Debate moderated by Donald Trump, a great American success story.” Can you spot the deviation from traditional journalistic ethics in that sentence? It comes from Newsmax, the conservative sort-of-news website sponsoring that debate. You may remember the Trump/Newsmax debate from this extremely fun series of events, or perhaps this one. You may remember Newsmax from the most pernicious lie of the last few years, which also happens to include a lot of Donald Trump. But you don’t need to remember any of that stuff to understand the importance of The Newsmax ION Television 2012 Presidential Debate, because Newsmax has helpfully reminded us. “The debate has gained huge support from the country’s largest and most powerful conservative groups and voices,” Newsmax Wires writes, “but several candidates have declined to join the debate, including Mitt Romney, whose poll numbers have been sliding since his refusal of Trump’s invitation.” Now that is some maximum fucking news, right there.

The impartially-reported theory that rejecting an invitation to the Newsmax debate causes a candidate’s poll numbers to slide might be best confirmed through indirect proof, since only two Republican candidates thus far have agreed to participate: Newt Gingrich, whose numbers are surging, and Rick Santorum, whose numbers have yet to exceed the margin of polling error and therefore cannot get lower. You see? Not participating in the Newsmax/ION Television debate is political suicide. That’s probably why the debate’s moderator is still talking about being a candidate himself.

Two lessons can be taken from all this madness. First, a good way to get Trump to participate in your event is to put the phrase “ION Television” right in the name. Like all natural leaders, he dreams of an America where people look at him. Second, maybe this story by an openly conservative news organization about its own debate among—sorry, between—Republican presidential candidates, moderated by a man who is himself a former/future presidential candidate, presents a distorted view of events. It’s not technically a single-source story, because they’ve got Steve King in there to balance out the other one: the vice-president of Newsmax. Still, some bias may have crept in.

I don’t mean to be gross, but imagine if Newsmax were your only source of information about events. Or, if you prefer, imagine that 40 slightly different Newsmaxes constituted the American press. For those of us who consider the postmodern/instrumentalist construction of truth an especially frightening type of speculative fiction, it’s a nightmare. Newsmax’s report on the Newsmax debate sponsored by that great American success story, Donald Trump, is a reminder of what happens when news organizations pursue two goals: reporting the news and some other thing.

The great mistake of contemporary news marketing seems to be assuming that I care what that other thing is. I may agree more with the motives behind MSNBC’s secondary agenda, but I don’t like it any more than Newsmax’s. The internet means that we have access to more information about politics and current events than probably anyone in human history. Depending on how we play it, that could mean we know more stuff or just encounter more false information than all our ancestors put together. I would hate to think that the most significant mass-communicative invention since the printing press would be harnessed to completely destroy reliable reporting as we know it. I think that might be, like, bad for our ability to govern ourselves. As much as I like arguing, I don’t want my premises to all be arguments, too.