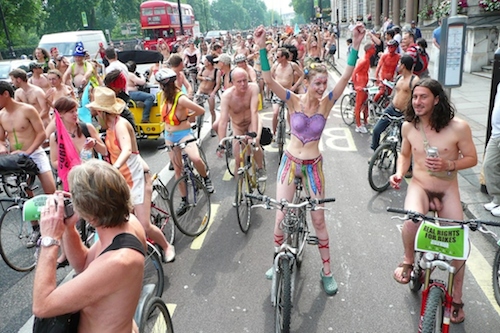 An image from the 2007 World Naked Bike Ride in London

Missoula’s Bare As You Dare nude bike ride is this weekend, and debate has finally reached its most mature form, with each side accusing the other of not being from here. We’ve also seen the familiar trope of someone claiming that another person’s ostensibly immoral behavior infringes on his rights. Here’s Missoula financial advisor and naked cycling opponent John McFarland:

There is also my right to free speech and my right to be on public property. And for those that say, ‘Well, if you’re just not interested, don’t go,’ that’s infringing on my rights to be at a public area at a certain time. That’s illegal. So she’s discriminating against me because of my beliefs.

There it is. Another person who does something you don’t want her to do is discriminating against you based on your beliefs. If she weren’t such a discriminator, she would do as you say. You can probably guess my opinion of this sort of busybody behavior, or you can read about it in my latest column for the Missoula Independent. We’ll be back tomorrow with Friday links, fully clothed.