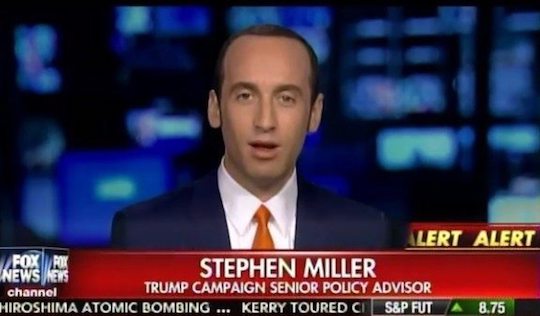 Now that Donald Trump has issued an executive order banning refugees and visitors from seven Muslim countries, we might take a moment to get to know the man who wrote it, Stephen Miller. Miller is a 31 year-old former aide to Sen. Jeff Sessions who spent the last year warming up crowds for Trump on the campaign trail. In that capacity, he posited a vast left-wing conspiracy that centered on his candidate. For example:

That’s from Julia Ioffe’s fascinating profile of Miller in Politico, which ran in June and advances the notion that he built his career on such accusations. As a student at Santa Monica High School after 9/11, he complained that students were not saying the Pledge of Allegiance on a daily basis. When administrators failed to accede to his demands, he called into conservative talk radio host Larry Elder to complain that they were anti-American. As a college student, he invited the ultra-conservative David Horowitz to speak at Duke, then claimed Horowitz had been banned by the university even though he hadn’t. In introducing the speaker, Miller read a list of university departments that had declined to contribute funding to the event. He seems to be working toward a pure politics: one animated not by particular issues but by a totalizing sense of conflict with the other side.

This rubric might be the best way to understand the Trump presidency. Public polling on specific policies—gun control, single-payer health care, et cetera—finds majority support for plenty of things the Republican Party vehemently opposes. Yet the GOP has managed to dominate contemporary politics by constructing its rhetoric around opposition to the Democratic Party. Trump voters may love the component parts of the Affordable Care Act, but they despise Obamacare. Their loyalty to Trump—and to a lesser extent the GOP—transcends what he actually does, because it is grounded in resentment toward those who oppose him. As the enemy of their enemies, Trump is their friend.

Friday’s executive order makes more sense in that context, as a political maneuver, than it does as a policy. As we noted earlier, it doesn’t apply to any countries whose citizens have killed Americans in terrorist attacks. It’s potentially unconstitutional and logistically disastrous: Trump issued it without fully consulting the departments of Justice or Homeland Security. But it enrages the right people. When its opponents rightly call it anti-Muslim, they side with foreigners—foreign terrorists, probably—against the president. Once again, “the people who are opposed to Donald Trump” come down on the side of everything wrong in the world.

I reject the 3-D chess theory of Trump’s incompetence. When he makes an idiotic tweet or issues an executive order that throws the nation into chaos, he’s not cleverly distracting us from some other issue. He’s just an arrogant trust fund case doing a job he’s not qualified to do. The destructive effects of his policies and behavior are accidents, but the galvanizing effects are not. Trump won the election as an alternative to Hillary Clinton and the dozen Republicans voters perceived as watered-down versions of her. He is a purely oppositional figure, the guy who will stick it to reporters, college professors, Bushes, Clintons, and all the other people whom Tea Party Republicans trained one another to hate for the last eight years.

The left of the 1960s coalesced around opposition to a perceived mainstream. When a conspiracy among government, big business, the church and suburban parents urged society toward conformity at all levels, behaviors like smoking weed and living in a van took on political significance. They became identities, a way to be on the right side in an epic national conflict. The specter of concerted opposition made hippies into Democrats. Miller seems to be pursuing the same principle. By positing a vast left-wing conspiracy against values like patriotism and free enterprise, he compresses factions that are natural enemies—adults without college degrees and big business, for example, or libertarians and anti-Muslim authoritarians—into a unified whole. It’s the politics of common enemies.

The fundamental promise of Trump’s campaign was to stick it to those enemies. His daily outraging of the press can be understood as the fulfillment of that promise. The object of his executive order against Muslim immigration, written by Miller, is not to protect America from terrorists. It’s to reify the opposition between Trump and the media, Trump and defenders of individual rights, Trump and Washington itself. If you start from the premise that the people opposed to Trump are responsible for everything wrong with America, that makes Trump responsible for everything right.