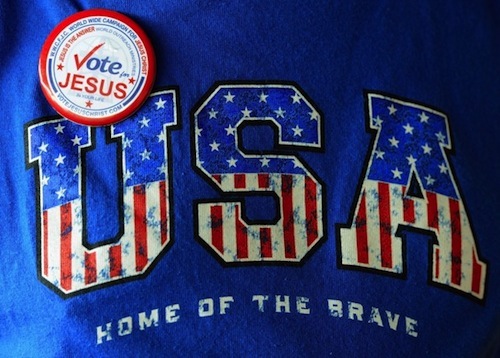 Strangely, perhaps even depressingly, the big deal in last week’s revelation of massive domestic NSA surveillance is how not a big deal everyone thinks it is. According to a Washington Post/Pew poll, 56% of Americans consider secret court orders that allow the NSA to access millions of phone records “acceptable,” while only 42% consider it “unacceptable.” Forty-five percent say the government should be allowed even more leeway than it secretly gave itself, provided that power is used to fight terrorism. Even though half of Americans presumably do not regard themselves as terrorists, they believe their government should be able to arbitrarily investigate them, because terrorism. At the risk of pique, this is the same country that refused expanded background checks for gun purchases as an unconscionable infringement on the Second Amendment.

To be fair, it was Congress that refused background checks as an unconscionable i on the 2nd a, not the general public. Besides, mass shootings of schoolchildren and moviegoers aren’t terrorism. As Conor Friedersdorf points out, guns, diabetes and drunk driving kill far more Americans than terrorism annually, even in 2001. But the specter of international terrorism scares us much more, even though we are statistically more likely to be struck by lightning than to be killed in a terror attack.

If the government required us all to wear rubber-soled shoes in order to reduce our vulnerability to lightning, people would picket in the streets. Yet the government’s decision to require us/our telecom providers to turn over our phone records—made in secret and acknowledged only after it was leaked—has been greeted as a necessary measure to defend ourselves against a threat quantitatively less threatening than a rush-hour commute.

In short, the terrorists won. In 2001, Osama Bin Laden wanted to commit a symbolic act that would make Americans so afraid of foreign terror that we would fundamentally change our way of life, and it worked. It worked beyond all proportion to the damage it actually caused. Twelve years after September 11, 2001, we have created an enormous domestic security apparatus that can secretly spy on millions of us in flagrant violation of the Bill of Rights, get caught, and suffer only the mild opprobrium of less than half the country.

This fundamental change in the relationship between Americans and their government is all thanks to the War on Terror, a war that has primarily consisted in bombing remote foreigners and treating

We don’t have the war, in other words, but we have soft martial law. There is a big difference between where we are now and house-to-house searches on darkened streets. But the United States government of 2013 reserves the right to know whom you communicate with, what you buy and what you read on the internet, and it considered its right to know so natural that it did not feel obliged to tell us about it.

The rationale is that domestic spying saves American lives, but the war in Afghanistan has killed more Americans and allies than 9/11 did. Roughly as many Americans died of food poisoning in 2001 as were killed at the World Trade Center. The real problem is not the danger of being killed in a terrorist attack, but the fear of it. If only there were a name for widespread fear that prevents us from thinking reasonably about our values.

If only the words “home of the brave” were something more than a political catchphrase. Now that we have retroactively approved the secret policing of our correspondence to protect ourselves from a scary thing that happened a decade ago, what are Americans meaningfully brave about? We fear terrorism. We fear fear itself. At least we’re still the land of the free.