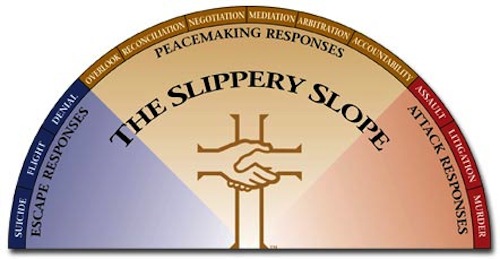 A baffling chart, courtesy of peacemaker.net

Over at the Times, Thomas Friedman has invoked his own slippery slope to argue that if we don’t allow the NSA to log our calls and finger our metadata, another 9/11 might encourage us to cede our civil liberties even worse. It is a pretty convoluted slope—call it the slippery water slide. Friedman’s essential claim is that, while this recently-revealed infringement on our privacy is bad, it does not have so significant an impact on our civil liberties as the theoretical laws a frightened populace might accept in the aftermath of another theoretical 9/11. Then we’d really be in trouble.

I worry about [another 9/11] even more, not because I don’t care about civil liberties, but because what I cherish most about America is our open society, and I believe that if there is one more 9/11—or worse, an attack involving nuclear material—it could lead to the end of the open society as we know it. If there were another 9/11, I fear that 99 percent of Americans would tell their members of Congress: “Do whatever you need to do to, privacy be damned, just make sure this does not happen again.” That is what I fear most.

At the risk of inflicting a Twilight Zone ending on Mr. Friedman, I would like to point out that 9/11 already happened, and we already told Congress to do whatever. Is what he cherishes most the exact balance between liberty and security that we struck after 9/11? To claim that we must fudge our constitutional liberties to prevent an attack that could lead us to fudge our constitutional liberties suggests that what Friedman fears most is not the loss of our “beautifully open society,” but another attack. The society is already closing; we have a secret domestic surveillance program. Friedman’s future worst-case scenario is the hypothetical version of the actual scenario he is defending.

So maybe his argument is not super valid. The question of whether it is sound, on the other hand—whether the domestic surveillance program currently in place is preventing future 9/11’s—is more interesting. Part of the problem in deciding whether this program is appropriate lies in knowing whether it’s doing any good. If it is preventing subway bombings at a rate of one every two years, it might be worth it. If, on the other hand, NSA data mining is the domestic surveillance equivalent of not letting me bring my nail clippers on the plane, it is bullshit.

A society that would trade liberty for security deserves neither, said Ben Franklin when the most dangerous weapon on earth was a musket.*

He did not say anything about a society that would trade liberty for the illusion of security, but I can guess his opinion. Both an effective, minimally intrusive domestic security apparatus and an overweening police state will tell you they’re protecting you from existential threats. Unless you want to categorically forbid certain techniques for maintaining security—for example, blanket searches of people who are not suspects in specific crimes—the only way to make sure you’re not getting duped by your ostensible protectors is to demand results.

Here lies the problem with the NSA dragnet. Plenty of people agree that it’s worth the clear infringement on Fourth Amendment rights if it prevents future attacks, but does it? Until last week, the program was a secret. To me, that suggests it hasn’t yet thwarted a 9/11-sized terrorist plot. Had the Obama administration foiled another attack of that scope, I think they would have shouted it from the mountaintops, but maybe I’m naive. Maybe this program is secret because it’s working so well, and not because it is unprecedented in its disregard for protections against unreasonable searches.

Still, what would be the harm in showing us a few instances of how the NSA has saved lives by collecting all our phone records? Friedman cites David Simon in arguing that telling terrorists how we surveil them only helps them skirt those methods of surveillance in the future. But surely the terrorists we have already thwarted know that they got caught. What were they planning to do? How has this new, secret reduction in every American’s privacy from the government prevented specific attacks? Because if it’s only potential future threats that we’re protecting ourselves from, I would like to point out to both Friedman and the NSA that the reduction in civil liberty is known and real.