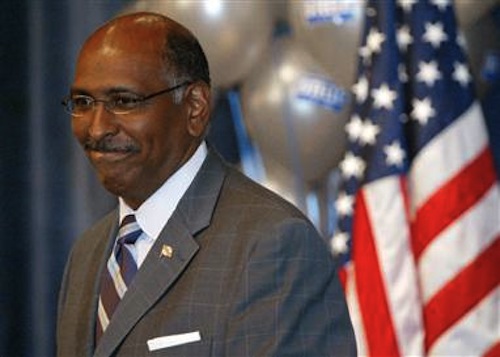 Striding boldly forward onto his dick, Michael Steele told the crowd at a Republican fundraiser Tuesday that Afghanistan is a “war of Obama’s choosing.” “If he’s such a student of history,” Steele said, “has he not understood that, you know, that’s the one thing you don’t do is engage in a land war in Afghanistan?” First of all, Steele clearly watched The Princess Bride last week (4:30.) Second, I don’t know if you remember this, but the United States invaded Afghanistan in 2001, shortly after the September 11th attacks and technically, you know, seven years before President Obama took office. It’s difficult to argue from that chronology that Afghanistan is not a war of George W. Bush’s choosing or, if you have a lot of stickers on your truck, Osama bin Laden’s. It does, however, remain totally easy to say.

In Steele’s defense, the larger point of his remarks seemed to be that Obama had chosen to focus on Afghanistan instead of Iraq, and that’s a bad idea. “Everyone who has tried over a thousand years of history has failed,” he said. “And there are reasons for that. There are other ways to engage in Afghanistan without committing more troops.” Don’t assume that Steele’s evocation of a thousand years of failure means that he thinks the war is a bad idea, though, or that he’s against committing more troops. This morning, Doug Heye of the RNC released a statement clarifying Steele’s remarks: “Nowhere did Steele say or suggest that (a) we shouldn’t be there, (b) we can’t win or (c) he didn’t support the surge.” Here Heye appears to be using the word nowhere in its classic sense, to mean “not any place but in the statements just quoted.”

Also in Steele’s defense, he’s totally right. Afghanistan is the graveyard of empires, and meaner nations than us—the Soviet Union, Victorian Britain, Edwardian Britain, current Britain—have tried to make it something more than a hillbilly opium farm for like ten centuries. It never works. At the risk of sounding like Dr. Watson, the people of Afghanistan appear ungovernable, by Afghanis or by well-meaning 19 year-olds from Tennessee with automatic rifles. Unfortunately, as RNC chairman it is not Michael Steele’s job to be right. It’s his job to be the Republican Party, and the Republican Party thinks the Afghan war is pretty much the most important thing we’ve ever done.

Let me clarify: the Republican Party says the Afghan war is pretty much et cetera etc. In its heart of hearts, I’m sure the personified GOP is just as concerned about fighting an objectiveless nine-year war against an invisible enemy so that illiterate religious fanatics will spontaneously adopt democracy/stop flying our planes into our buildings as we are. We’re all effed on Afghanistan. Even if it worked tomorrow—whatever “worked” means in this context—it would still have taken nine years to do so. It’s possible that invading a famously difficult failed state days after we suffered the worst terrorist attack in our nation’s history was kind of rash.

If we accept this premise, Michael Steele’s position becomes a weirdly apt metaphor for our own. This is an absolutely unprovable assertion, but I’m going to say that most sensible people do not regard the war in Afghanistan as a good thing. Even if you believe, as Steele said yesterday, that “the stakes are too high for us to accept anything but success in Afghanistan,” or—as DNC spokesman Brad Woodhouse said in his condemnation of Steele, that “we are not in Afghanistan by our own choosing, that we were attacked”—it’s difficult to argue that the Afghan war has been a boon for the United States.

A nation wishing to wisely prosecute war must accept that some wars are more winnable than others. It must also accept that it is possible to inaccurately assess winnability. Apparently it’s unpatriotic to say so, but we should probably also grant that it is sometimes wise to withdraw from a war, and that expounding on the importance of winning makes winning no easier. On Friday, Michael Steele proved that we have limited our ability to productively discuss what is happening in Afghanistan.  Regardless of whether the war was or is now a good idea, we ought to be able to talk about it.