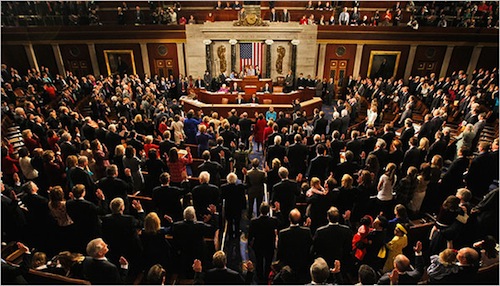 “I don’t see myself as a man of great wealth,” says Arizona representative and millionaire Ed Pastor in this article from the Times. “To say that I’m enjoying a millionaire’s lifestyle—well, I can tell you, I guess a millionaire’s income doesn’t go very far these days.” He’d be surprised what it’s like to be a thousandaire. The median income for Americans not elected to Congress sits around $31,000 a year. Net worth—assets minus debt, which means house minus loans for a lot of people and World of Warcraft character minus rent for the rest of us—medians at $100,000, and it’s dropping. Even the richest 10% of Americans have stagnated since George Bush Jr. vied for the presidency against John Kerry, and the overall net worth of Americans has dropped eight percent. Yet over the same period, the median worth of a member of Congress has increased 15%. That seems like a troubling indicator.

To quote The Dude paraphrasing Lenin, you look for the person who benefits and uh, uh…*

Like the news that stock investments held by senators outperform the market by 10%—or the news that they don’t—the discovery that our elected representatives are getting richer while the rest of us get poorer is difficult to interpret. It’s possible that the simplest explanation is correct, and Congressmen are using their power to make laws and access federal-government information to get that paper.

Such is the case with Rep. Darrell Issa (R–CA,) who earmarked $800,000 in federal funding to widen a road that happens to run alongside one of his own commercial real estate properties. That’s straight-up corruption, right there, and it’s the explanation that leaps to mind when you hear that the median wealth of House members has more than doubled since 1984. The shoemaker makes money by making shoes. Ergo, the lawmaker…

But another explanation is also plausible: since the mid-eighties, a greater portion of our elected representatives has been drawn from the population of Americans who are rich already. Congress has long reserved a seat for a Rockefeller and a Kennedy (both of whom also appear in my spellcheck dictionary,) and only a fool would argue that a successful campaign is getting cheaper. It may be that, in this age of television advertising and festive bus tours, our electoral process selects for people who have a million dollars already.

A fun thing to think about is which of those explanations would be worse. A corrupt Congress that makes personal profit the guiding principle of national law certainly sounds bad. You don’t want a government that, say, starts a land war in Asia so Halliburton can sell lunches. We should vote those people out. Yet the notion of a political system in which only millionaires can afford to become lawmakers is arguably worse, since in that case we wouldn’t even have recourse to voting. Prohibitively high campaign expenses plus legislative branch with the power to repeal the estate tax equals House of Lords. Those of you who enjoy class warfare as much as I do are encouraged to toss in Citizens United v. FEC and consider the potential of market forces to obviate not only thousandaires’ right to be elected to Congress but also our right to vote.

That’s called paranoia, right there. Broad statistical trends in electoral democracy are Rorschach blots: the shape of the cloud says more about how you think than what you’re looking at. Yet what we see is quantitative: during a time that Americans as a whole have gotten less money, Congressmen have gotten more. The numbers are the numbers. Depending on whom you ask, millionaires account for between 1% and 10% of the population of the United States. They are 50% of the population of Congress.

Maybe that explains why our elected representatives have spent the last year debating whether to cut Medicare and food stamps while coalescing in an iron filibuster against increasing the top marginal tax rate. Our 2011 legislative season considered fundamental changes to the American social safety net, but a millionaire tax was dead on arrival. Perhaps Washington is full of rapacious amoralists who run the country like a small-town McDonald’s. Perhaps it’s full of Thurston Howells who cannot imagine choosing between health insurance and a car. Whoever these people are, we put them there. We are moving toward a day when we are too poor to get them out.