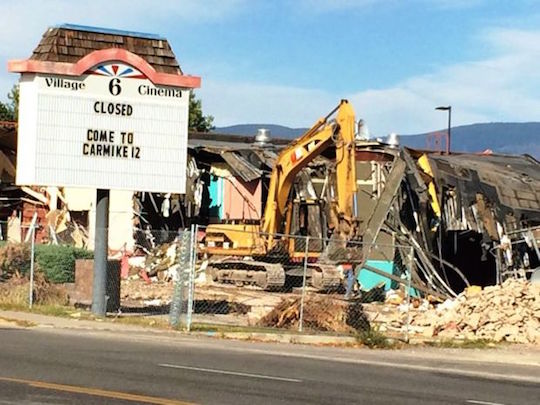 The old movie theater that went out of business, about a mile from the new theater everyone will love

Last week, developers presented the Missoula Redevelopment Agency with a plan to expand Southgate Mall using $13 million in public funds. Included in that total was a $5.2 million right-of-way fee the city might pay to build a new road connecting Brooks and Reserve Streets through mall property. You read that right: the owners of Southgate designed a street to funnel traffic to their business, and they want the city of Missoula to pay $5 million for the privilege of building it. It’s a gutsy ask, but what is more surprising is that it will probably work.

The MRA has acknowledged that the mall’s proposal asks for more money than it usually spends and significantly exceeds the public-to-private funding ratio in the agency’s guidelines, but they lean toward doing it. I quote the Missoulian:

[MRA staff] also noted the risk of not taking action, saying that other malls across the country are failing. In the event that Southgate Mall did fail—it’s financially strong currently—the empty building would spread blight and cost much more to raze for another use.

I’m not sure that makes sense. The city should invest $13 million in Southgate because malls across the country are failing? And our privately-owned mall deserves millions of taxpayer dollars even though it’s doing well? That sounds less like a plan for urban renewal than an award to real estate developers for maximally influencing city government. You can read my scurrilous remarks in this week’s column for the Missoula Independent.

I imagine some of you did not wake up this morning wondering what’s to become of Urban Renewal District III in Missoula, Montana, but I submit that there’s no machination like municipal government machinations, and the cogs of Missoula’s government are particularly exposed. Even if you don’t plan on visiting Southgate Mall, the mechanisms by which real-estate developers secure $13 million in public funding for a perfectly healthy private enterprise are worth considering. If you want to understand how corporatocracy works in the United States of America, consider how it operates in small-town Montana. We’ll be back tomorrow with Friday links.