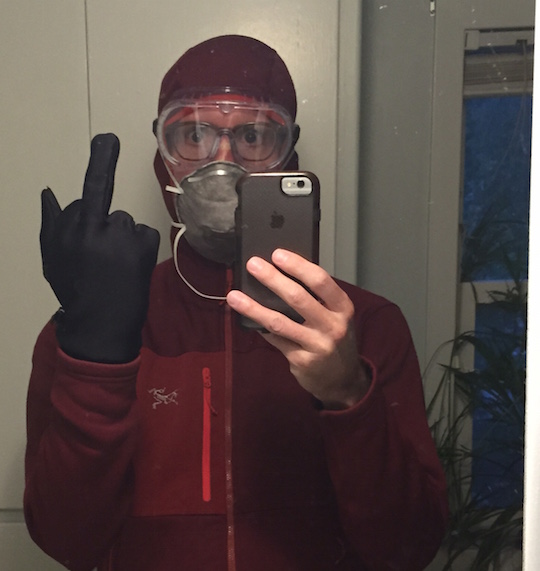 The author in his wasp suit

A few weeks ago, I noticed yellow jackets flying in and out of the gap between my stair and the siding. “I don’t need to do anything about this,” I thought, and went inside to vomit. Then this week, as I was chaining up my bicycle, one of the greatly increased number of yellow jackets stung me on the calf. “That’s it,” I said. “I’m going to do something if this happens again.” Yesterday they got me twice, on that one big vein that runs over the top of the ankle. I could feel the venom going up my leg. Generally, it is against my ethics to kill living things; I’m the guy who catches spiders in a rocks glass and turns them loose outside. My personal code also forbids doing chores around the house. But wasp appeasement had clearly failed, so I went to the hardware store and bought toxic spray and foaming sealant. Today is Friday, and we all must do what must be done. Won’t you poison whole societies with me?

First, the good news: Manhattan District Attorney Cyrus Vance Jr. finally prosecuted a bank for mortgage fraud. The bad news is it was Abacus Federal Savings Bank, a six-branch operation that primarily serves Asian immigrants in the five boroughs and New Jersey. After it discovered loan officer Ken Yu falsifying borrower information in December 2009, Abacus notified regulators, fired Yu, and presented prosecutors with 900,00 pages of documents. Yu cut a plea deal with Vance, who in 2012 indicted the bank and former employees on 184 counts of mortgage fraud. Last June, a jury threw out all 80 charges against the bank that made it to trial. It appears the management of Abacus Federal was extraordinarily honest. At the risk of cynicism, the difference between them and other New York banks might be that Abacus was not too big to try. I quote the Times:

The prosecution against Abacus appears to be Mr. Vance’s only mortgage-related prosecution against a bank since he won election as Manhattan district attorney and took office in January 2010. Ms. Vollero declined to provide a list of other cases brought by Mr. Vance related to the financial crisis. She did point to guilty verdicts in a 2010 mortgage fraud case against AFG Financial Group, a loan originator that Mr. Vance said had used sham real estate sales to defraud banks of more than $100 million. AFG Financial, based on Long Island, was not a bank.

Someone must be held responsible for the subprime loan crisis that wrecked the economy in 2008, and I don’t see any reason why it shouldn’t be a small, unusually careful, overwhelmingly nonwhite bank. Sometimes, people in authority have to make difficult decisions. For example, I have decided to embed a video by Jimmy Fallon, even though he makes me want to systematically punch through 100 cardboard cutouts of Jimmy Fallon. But the split-screen footage of Scott Walker’s Kohl’s anecdote that starts at the one-minute mark is a masterpiece of editing.

Scott Walker is a normal person and as such has made several observations of normal life. Right now, my favorite microgenre of political coverage is stories in which reporters try to find polite ways to observe that Walker is dumb.

Of course, “dumb” is a relative term. Here in the last best place, Superior, MT volunteer fire chief Richard Miller stands accused of distributing child pornography and, after police questioned him, chopping up his computers with an axe. The pieces of the, um, hacked computers were then found in a bucket in his office at the fire department. Reenactment:

Miller: I’ve got to destroy this evidence of my uploading child pornography!

[In the distance, a dog barks.]

Miller: I sure like tacos. [Destroys computers with axe.] I’ve got to get rid of the pieces of these broken computers!

Miller: There’s a garbage can at work!

Here’s your girl Kathryn Haake with an eye for the salient detail: “‘When asked why he was searching out child pornography, Rick said he didn’t know,’ the affidavit stated. ‘Rick said it was a ‘crazy’ day and he didn’t know what he was doing.'”

I’ve had a crazy few weeks, but so far the most illegal thing I did was fudge a red light. Who knows, though, but I might find myself in a fugue state, uploading child pornography to the internet. If the news has taught us anything, it’s that anyone can go crazy at any time. Props to Ben al-Fowlkes for sending me this gem by Key & Peele at their most unrepentantly weird: