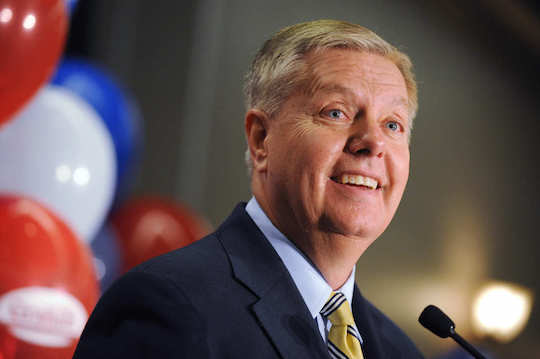 Lindsey Graham ran for president this year, and it didn’t go great. He ended up one of a dozen candidates knocked out by a celebrity clown and the most hated man in the Senate, and here lies American democracy in 2016. It’s a situation that invites frank assessment—something from which senators refrain on an almost professional basis. But as Miracle Mike Sebba recently pointed out to me, Graham seems to have embraced honesty. Here he is publicly reversing his position on Apple vs. FBI. Here he is declining the opportunity to pledge his support to the eventual nominee. And here he is at the Washington Press Club dinner, complaining that his party has gone “batshit crazy.” Together, these brushstrokes paint a much more likable Senator Graham. Maybe that’s because he more closely agrees with my politics now. But maybe it’s because he’s finally speaking candidly.

If you asked me last year whether candor was a hot commodity in the contemporary Republican Party, I would have said no. The most vital movement in the GOP—indeed, in American politics generally—seemed to center on ideological conservatism. The tea party appeared to be an ideological crusade. As such, it demanded orthodoxy—both from the party leaders it branded “Republicans in name only” and from the openly partisan media outlets like FoxNews, Breitbart, RedState, Drudge, etc. it coalesced around. This was the infamous epistemic closure, and it seemed to be the defining feature of movement conservatism since 2009.

But Donald Trump offers a counterexample to that theory—a big counterexample that has consistently beaten other, more conservative candidates and now threatens to remake the Republican Party, if not split it in two. The success of his campaign has proven that a plurality of self-identified Republicans care less about conservative ideals than they care about something else. But what?

Probably the answer is something ugly: racism, Islamophobia, a dumb kind of strength that reassures them thinking is for pussies. It’s possible Trump, with his omnidirectional knack for insulting people and dismissing ideas, reflects a party that has spent the last two presidential terms defining itself in negative terms. Republicans are against Obama. They’re also against immigrants, Muslims, China, compromise, and nuance. Trump is the candidate who most gleefully urinates on all those things, so in this moment of intensely negative conservative politics, he is their man.

But what if that’s not it? Certainly, the Trump campaign is negative and dumb. I will not walk back from the assessment that he is the bumper sticker of candidates, selling the kind of rhetoric a person of subnormal intelligence thinks is really clever. But not everyone who supports him is stupid. If the moron vote had really captured 40% of the Republican Party, we would have noticed before now. Perhaps the secret to Trump’s appeal is the thing his supporters keep telling reporters and pollsters again and again: he tells it like it is.

When we hear that statement, we tend to get distracted by the fact that Trump is obviously telling it like it is not. The number of false statements that come out of his mouth on a per-minute basis probably exceeds that of any other candidate. But inaccurate candor is still candor. No other candidate lies as much, but that’s because no other candidate says as much. In a world where true and false have little meaning—the world of the low-information voter—Trump’s sheer, reckless volume of statements amounts to frankness.

I submit that what we like about Lindsey Graham, when he goes on TV and says his party has lost its mind and he won’t go along with it, is what many voters like about Trump. The difference is that Graham happens to be right. But the likable quality of saying what he thinks without regard for orthodoxy or loyalty is the same in both men. It’s just that Graham has stopped being loyal to his party and the orthodoxy that whatever candidate it nominates must be right, while Trump has stopped being loyal to responsible discourse and the orthodoxy that you shouldn’t demonize whole groups of people.

That’s not a superficial difference. It’s thrilling to watch Senator Graham embrace honesty because he’s right: the Republican Party has gone crazy, and Trump doesn’t deserve its support. But his hokum is functionally different from Graham’s candor only if you can distinguish truth from lies. If you can’t—if your world is what you kind of remember from numbly watching Fox News for six hours a day plus whatever people said at work—these two men are doing the same, thrilling thing. Finally.