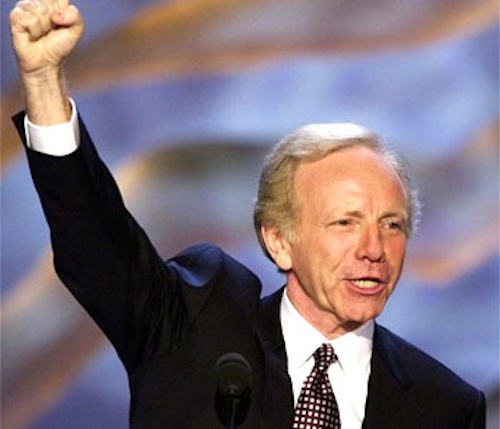 Yesterday, we got all up in our heads about what the search for meaning in terrorist acts might possibly mean, and despite that sure-fire discursive strategy, things got a little abstract. Fortunately, we’ve got Joe Lieberman to bring us back to hard, unforgiving, maybe-taking-you-away-in-the-night-with-a-velvet-bag-over-your-head reality. In the wake of the arrest of Faisal Shahzad, the senator from Connecticut proposed legislation that would revoke the citizenship of Americans tied to terrorist organizations. Incensed at the news that Shahzad, a naturalized US citizen, had been read his Miranda rights after his arrest, Lieberman was joined in his outrage by Rep. Peter King (R–NY) and John McCain, who apparently has some kind of personal hypocrisy bucket list. The Paul Theroux Man of Straw Award has to be given to senator Chris Bond on this one, though, for saying that “We’ve got to be far less interested in protecting the privacy rights of these terrorists than in collecting information that may lead us to details of broader schemes to carry out attacks in the United States.” When an extrajudicial authority strips you of your American citizenship so that you can be imprisoned indefinitely without trial or sent to Egypt for interrogation, it’s not your privacy that’s violated.

That scenario probably sounds a little farfetched to you. It certainly did to me, when Lieberman announced it in his usual depressed-elf monotone, but Greg Sargent at the Washington Post says that plans to introduce the legislation are moving forward. Lieberman’s law would allow the State Department to determine whether Americans had sufficient connection to foreign terror organizations to revoke their citizenship, either before they were charged with an act of terrorism or retroactively. You can already lose your citizenship for serving in a foreign army, taking a loyalty oath to another country or staring into Joe Biden’s eyes and saying “I break with thee” three times in a firm voice.*

And Lieberman’s law will allow for challenges to the process in court, during which trials the burden of proof will be on the State Department to prove that you are connected to a terrorist organization.

Still, what constitutes a connection? Attending a certain mosque? Giving money to a particular charity? Reading The Coming Insurrection? While it’s unfair to criticize the precision of a law that hasn’t even been drafted yet, Lieberman’s proposal seems unworkably vague, especially given the severity of the punishment it would impose. More troubling is its intent to leave such decisions to the State Department—an entity that is not, as you civics nerds will remember, part of the judicial branch. The question of why, exactly, we should be so anxious to get suspected terrorists out of the realm of law enforcement and under the purview of the military is the thrust of this editorial in the Times, which points out that civilian law seems to have done a fine job thus far. That position is a well-reasoned and responsible one, but it neglects the reason why Lieberman’s law is so terrifying in the first place.

It seems possible that our multi-organizaitonal, multi-billion-dollar, indefinite War on Terror might eventually pick up somebody who didn’t do anything. Faisal Shahzad appears by his own admission to be guilty as sin, but what about those five idiots from Alexandria? What about the next guy we catch? It seems overambitious to assume that the combined efforts of the FBI, CIA and Departments of State and Homeland Security will not only protect us from international terror, but also be the first law enforcement operation in history to never arrest an innocent suspect. It’s bad enough that we subject foreign nationals to secret trials and extraordinary rendition. Do we want to start doing that to Americans?

Most likely, Joe Lieberman has no intention of doing that to actual Americans, because that’s not who he was thinking of when he came up with his law. Like so many proposals to get tough on terrorists, Lieberman’s law applies only to imaginary people. When we think of terrorists, we don’t also throw in a small percentage of guys who never did anything but got picked up by our imaginations anyway. In our discussion of ways to deal with the global network of evil madmen who are constantly plotting to murder us, we tend to presume guilt. After all, it’s not our all-possessing fear of a breakdown in jurisprudence that we’re trying to assuage.

In reality, though, terrorists don’t generally come to us with their guilt already proven. We don’t want them to; the whole point is to catch people before they’ve done anything, before they’ve left a car full of fireworks and propane in Times Square. If the United States is going to have an effective counterterrorism strategy, we’re going to pick up a lot of people whose guilt or innocence is not immediately clear. Some of those people will have committed no crime, and some of them will be Americans. In that context, Joe Lieberman’s law will be a means of ensuring the innocent people are interrogated, imprisoned or executed anyway. It will guarantee only that we can tell ourselves we’re doing something about terrorism in cases where we’re not.

Lieberman wants to do away with the citizenships of accused Americans to make it harder for them to escape justice. I say justice is more than punishment. It is the right determination of guilt or innocence that makes a country just, and the reasoning of Senator Lieberman—that it is more important to fight the War on Terror hard than it is to do so carefully—seems cynical in the extreme. “Punish the guilty” is an invariably popular thing to hear from a podium. To hear it from a bench, however, before the trial has even begun, is quite another thing.