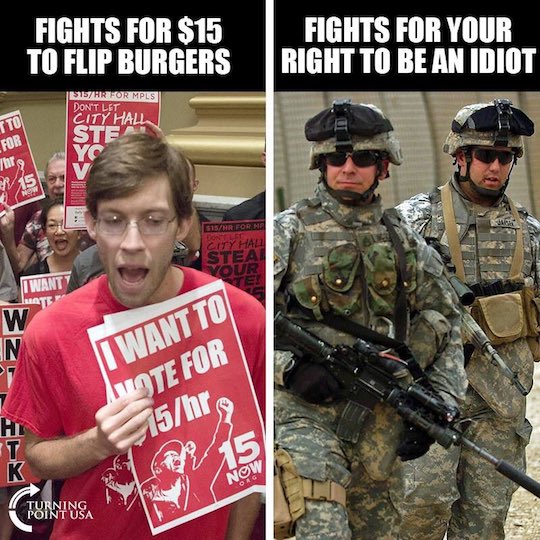 According to its Twitter page, Turning Point USA is a student movement for free markets and limited government whose members are “the community organizers of the right.” According to Wikipedia, Turning Point is a 501(c)3 organization that took in $78,890 in 2012 and $5 million in 2016. Its tax status keeps it from participating in political campaigns, but it can issue broad statements of ideology like the meme above. The @TPUSA Twitter account tweeted it a little after noon in the One True Time Zone. It’s a picture of some labor protestors and some soldiers: one side “fights for $15 to flip burgers” while the other “fights for your right to be an idiot.” That’s what is written, but what does it say, man?  It’s never an easy question to answer, but lucky for you, I’m a nearsighted palmist. That’s right: I like to do a close reading.

So the surface reading here is that it is stupid to expect $15 an hour to perform food service, but thanks to our men in uniform, you are free to ask for such a thing. Enjoy your freedom, idiot! The implication is that Turning Point USA is against raising the minimum wage1 and in favor of…a robust military? The troops? The left/right comparison meme calls for a second panel to contrast with the first, and “veterans fight for your right to [something dumb]” is a recognizable trope, so a picture of soldiers works. Soldiers are cool; dudes with glasses who flip burgers are losers. But when you try to identify what specifically Turning Point is for in this bad vs. good comparison, several things seem possible: the soldiers themselves, increased military spending, intervention in the Middle East, et cetera. This note of ambiguity is the first hint that we are being deceived.

Here’s a fun question: Which side of this meme are we supposed to be on? We probably shouldn’t be the idiot who wants $15 an hour to flip burgers. We should therefore join the army and fight in a war? That doesn’t sound appealing, either. Although the soldiers are definitely cooler than the labor protestor, they’re both kind of screwed. Once you see the burger nerd and the army guys as equivalently doomed, the whole meme starts to unravel. Nobody is winning in the system of values it espouses. The message seems to be “Don’t be a prisoner. Be a guard!”

Must the people on the right die to protect a system that makes the people on the left stupid for thinking they can live comfortably? It leads me to wonder whether a third panel that has been cropped out shows someone having a good time. I don’t mean to get all cui bono, here, but this meme asks you to compare the fast food employee to the soldier so you don’t compare both of them to the people who profit from their exploitation.

Those people are, of course, the members of Turning Point USA and its donors. For the most part, college students don’t flip burgers or serve in the military. The people who gave an incorporated movement of young conservatives $5 million last year sure don’t. They may have strong opinions about the relative merits of soldiers and minimum-wage workers, but in the end they aren’t either. They are the third person who weighs them against each other and puts his thumb on the scale.

That’s how it would be, anyway, if the world were shaped by broad conspiracies. In my experience, though, the world is shaped by people doing stuff without thinking about it. Turning Point USA should have thought more about this meme, because I’m not sure it reflects their values. Their motto is “Big Government Sucks,” but I don’t see how private-sector employees getting a federally mandated wage is bigger government than soldiers serving in the army. The military is government at its biggest. It gets the biggest share of discretionary spending, and it determines every aspect of soldiers’ lives—from when they eat to what they wear to whether they live or die. If Turning Point thinks fighting a war is cooler than flipping burgers, they might like government better than they realize.

But the whole point of a meme is that you don’t have to think. We all know the army is conservative and labor is liberal. One wants more money for work anyone can do, and the other fights wars for freedom. The difference is perfectly clear, as long as you think about it for less than one second.