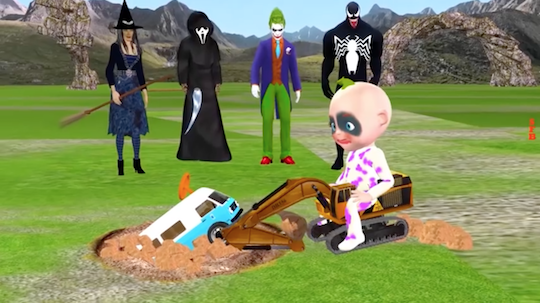 Automated reward systems like YouTube algorithms necessitate exploitation in the same way that capitalism necessitates exploitation, and if you’re someone who bristles at the second half of that equation then maybe this should be what convinces you of its truth. Exploitation is encoded into the systems we are building, making it harder to see, harder to think and explain, harder to counter and defend against.

The more we turn over the content of the internet to automated systems, the more we make the internet into the maximally effective version of something weird and disturbing to us. The things people want most are branded characters, certain screaming sounds, bright colors and simplistic violence, so here’s a video of Marvel villains burying people alive. It feels awful because few humans were involved in creating it, and those who were involved ceded their agency to an algorithm. Anyway, this essay seems like one of those ideas we’re going to refer to in the future, so I encourage you to read it. I’m glad I did.