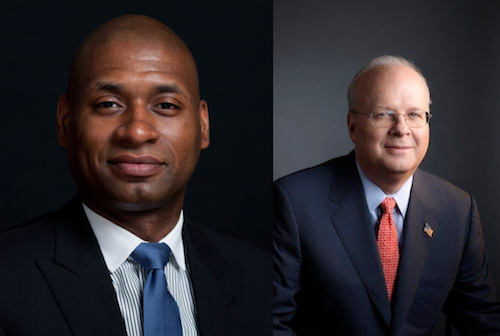 On Friday, we mentioned Rep. Steve King’s (R-IA) bold refusal to cancel the Senate run he hasn’t announced yet just because Karl Rove wants to stop him. Obviously, no stopping will be done by Rove personally. Unless a cupcake is rolling into the storm drain, Rove prefers to work through organizations. His newest, the Conservative Victory Project, is a joint venture with the American Crossroads Super PAC designed to ensure that more electable candidates win Republican Senate primaries. To hear Charles Blow tell it, it’s also an anti Tea Party.

Longtime readers of Combat! will remember that the blog was much better when the Tea Party was something we could take seriously. In the heady days of 2009, that plucky group of grassroots insurgents spontaneously stood up for constitutional government as instructed by FreedomWorks. Despite its revolutionary veneer, the Tea Party was first promulgated by an organization under control of Dick Armey and Jack Kemp, with its roots in the Koch brothers. Yet it identified itself as an omnidirectionally anti-establishment group. In the exact opposite phenomenon observed in Frankenstein, the creation became antonymous with its creator’s name.

Otherwise, it was pretty much like Frankenstein. FreedomWorks gave the Tea Party life, and the Tea Party tried to lovingly stroke the Republican Party but accidentally broke its neck. Activists threw their support behind “constitutional conservatives” like Rick Santorum and Michele Bachmann, who proved appealing to newly invigorated far-right Republicans but not to the electorate as a whole.

It turns out that the Tea Party was most effective at mobilizing conservatives for GOP primaries. In many cases, they vaulted to primary victory candidates who were doomed in the generals, such as Missouri rape expert Todd Akin. Certain disappointed Republican strategists who have already been named blame this phenomenon for the GOP’s failure to retake the Senate in 2012.

Hence the Conservative Victory Project, which maybe signals the beginning of Act III in the strange Shakespearean romance that has been the last four years of the Republican Party. The Tea Party began as an unrecognized prince, a declared upstart whose aristocratic lineage was widely unknown, or at least widely not thought of. Then it became an accidental usurper, rampaging around the countryside and losing elections for its parent party. Now that royal parent seeks to destroy it—just like the end of The Tempest, probably.

The point is that maybe the thing we always speculated might happen is happening now: the Republican Party is dividing itself into moderate and constitutional/libertarian/crazy factions. One of those factions has all the money and experience. The other has all the voter enthusiasm. The 2012 primaries demonstrated that crazy has the numbers and moderate will win; one by one, Perry and Cain and even Santorum had their time as the front-runner, only to inevitably fall to the wealthy centrist nobody liked. Now moderate blames crazy for the disaster that is the GOP since 2009, and they’re going to do something about it.

What that something is remains to be seen. As impressive an achievement as it was to create the Tea Party movement out of essentially thin air, the money-and-experience wing would have to be almost impossibly canny to kill it. You can’t tell a base raised on four years of apocalypse and Glenn Beck that now is the time to settle back down. Nor can you convince career realpolitickers like Rove and Steven J. Law that the best way to retake the federal government is to keep nominating the most staunchly conservative candidates. That didn’t work, and the one thing to which Rove et al remain undyingly faithful is whatever works.

So the uneasy relationship has become openly adversarial. The architects of Republican power have found themselves unable to put the genie back in the bottle, and so they have invested in an air filter. That is precisely the thing that invigorates the Tea Party, whose supporters love the idea that they are ordinary patriots struggling against entrenched power.

When the Conservative Victory Project declares its plan to win victory over these true conservatives, do you think they will fall into line? Or will they boldly give conservative voters the chance to choose between the guy who reflects their beliefs and the guy who might win?

It’s going to be awesome, is what I’m saying here. The Republican Party has turned its attention to fixing itself, and only hilarity is guaranteed to ensue. Maybe we’ll see a third party. Maybe we’ll just see a bunch of rad infighting. Definitely we will see a bidding war for the admiration of the crowd between men like Rove and men like King, and I personally cannot wait.