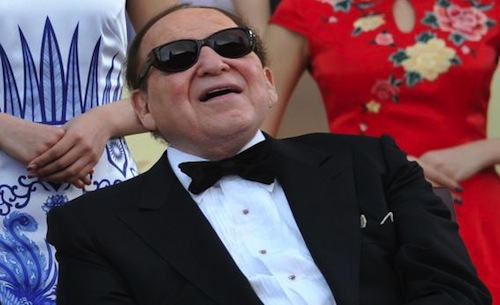 One of the many terrible disadvantages rich people face in this country is that we are all so happy to see them denied something they want. Mitt Romney triggered that psychological mechanism every time he mentioned the cars-to-people ratio of his household or owning an Olympic horse, and it cost him an election. Either that or his policies only benefited a small percentage of the electorate at the expense of everyone else—who can say? The point is that class warfare is alive and well in this country, and the pressure of anti-rich person groupthink is so great that even Sheldon Adelson told the Wall Street Journal he regards himself as kind of gross.

Granted, he couched it in a hollow braggadocio. The ostensible theme of Adelson’s comments was that he intended to spend even more on Republican candidates in the 2016 election, even though he went one for eight in November at a cost of $100 million. Adelson is in the casino business, he explained; you take the wins with the losses, and when you lose you double down. That’s actually how you build someone else’s casino business, but the metaphor is in there somewhere. Regardless, it was all just a setup for this:

Mr. Adelson, 79 years old, said he has many friends in Washington, “but the reasons aren’t my good looks and charm. It’s my ‘pocket personality,'” referring to his donations.

Is it possible that Adelson thinks of himself the same way we think of Adelson? Like, we find him repellent, but if he gave us all his money we would put it out of our minds? Perhaps Adelson doesn’t want himself influencing his life any more than we do, but there’s so much cash involved that he’s willing to put his objections aside.

Of course, there may be a less knotty explanation for why Adelson is willing to openly buy his way to friendship with Washington: his company, Las Vegas Sands Corp., is currently under investigation by the Department of Justice for money laundering. That’s a separate investigation of a different corporate entity from Sands China, currently suspected of violating the Foreign Corrupt Practices Act. There’s a wrongful termination suit out there against Sands, too, but it’s minor compared to the other two.

It’s hard to find this story outside the obviously biased confines of Huffington Post and Politico, but rumor holds that Adelson has lobbied Washington to change the Foreign Corrupt Practices Act, presumably to turn the heat down on this China thing. His net worth is estimated at $21.5 billion, and last week Sands approved a special dividend that would pay him another $1.2 billion. Conventional wisdom holds that they did it to now to get in ahead of a potential tax increase at the end of the year—the tax increase Barack Obama promised, and the one Adelson spent $100 million trying to stop by electing Mitt Romney.

His $1.2 billion dividend counts as capital gains, but let’s pretend he made that much money as regular income. The difference between a 35% tax on $1.2 billion and a 38% tax comes to $36 million. Over a four-year presidential term, such annual savings would reach $144 million. That’s a $100 million campaign investment well spent.

So here’s the creepiest thing about Sheldon Adelson: he can spend headline-making amounts on every election just to save himself 3% in taxes, and he still comes out way ahead. He intends to spend all that money on the Republican Party—even though, as he told the Journal, he is “pro-abortion rights, pro-stem cell research” and favors a “socialized-like system of health care”—because nothing is more important to him than reducing his tax bill.

We’re talking $44 million, here—more money than any ten Americans are likely to make in their lifetimes. It’s the kind of money that will make a man abandon all of his other principles. Sheldon Adelson didn’t make $21.5 billion by ignoring the 3% losses. And with that much money, he can spend $100 million per election for the next 840 years—and still have $1.5 billion left over to give to his holo-clones.

So I was wrong: the creepiest thing about Sheldon Adelson is the way he demonstrates that wealthy men are willing and able to  influence the course of American history to keep taxes from going up 3%. He explains why the GOP is a single-issue party. He reminds us how much we like to see rich people denied what they want, and how very, very rarely that happens.