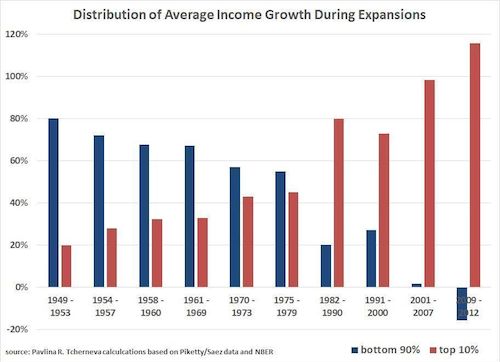 In this context, claims that Obama has been the best economic president in 30 years seem bitterly ironic. Yes, the Dow has rebounded to another all-time high. And yes, unemployment rates and jobs created have been better under Obama than they were at this time during the Reagan presidency. But Tcherneva’s findings suggest that people have gone back to work at lower wages, and rebounds in the investment sector have only helped the investor class.

And all it cost us was $983 billion. The Economic Stimulus Act of 2008 and the American Recovery and Reinvestment Act of 2009 spent nearly a trillion taxpayer dollars to create a recovery for the richest tenth of the population. Whether intentional or not, this historic expenditure now looks like a massive redistribution of wealth—by the government, from working families, to the people who caused the crash in the first place.

In retrospect, that seems kind of inevitable. Timothy Geithner and other architects of the Obama plan were criticized for bailing out banks but not mortgage holders, for feeding growth in the stock market that failed to translate into jobs. Those criticisms seem utterly justified now.

Consider the housing market, which recovered in the sense that prices went back up. But the people who fell into foreclosure still lost their houses, which—thanks to limited stock and reduced incomes for 90% of Americans—are now more valuable as investments than as places to live. Like the overall economy, real estate got even better for people with enough capital to get back in the market, and worse for everyone else.

Circumscribed growth like this makes the last five years look less like a recovery than a tightening of the screws. At our moment of crisis, the Bush and then the Obama administration took bold action to continue the ascent of the rich. We spent public money to protect private wealth, and we finally returned the economy to a state that benefited the wealthy even more than what we had before.

Compare this outcome to the distribution of income growth during the two decades after World War II, widely considered the economically best time in US history. The last 30 years look like an inversion of that, reversing a period of growth for everyone in order to catapult the investor class to unprecedented gains. If you are wondering how America became less equal and more class-bound than Europe, public policy since Reagan is a good place to start.

So here’s the $983 billion question: did we do it on purpose? Are the soaring inequality of the last three decades and the government interventions on its behalf the consequence of post-industrial economic forces no one could have predicted, or are they the result of a government that has been captured by money interests? Do we just happen to have both a robust financial services lobby and an economic policy that has taken money from 90% of Americans and given in to the richest tenth, or did one cause the other?

The growth, crash and recovery cycle of the last three decades is what corporatocracy looks like. Maybe it’s completely accidental, but what the federal government has done since 1980 looks like what it might do if we only let the richest 10% of Americans vote.

For a long time, the rich were getting richer faster than the rest of us. For the last five years, they’ve gotten richer while 90% of us have gotten poorer. That was after the Obama administration implemented the most ambitious economic plan of our lifetimes—the time when the federal government guided the economy more forcefully than it had in 50 years. Maybe it’s a coincidence, but look who it helped.