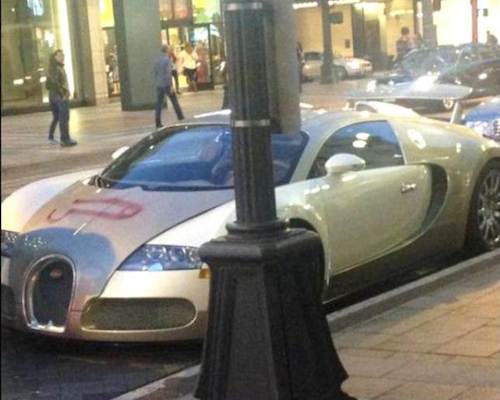 A $2.5 million Bugatti with a penis painted on it. Can you spot the composition error in this photo?

According to a website called The LAD Bible, someone parked his Bugatti Veyron on the streets of Seattle, where someone else—presumably a rival Veyron owner—spray-painted a penis on the hood. The LAD Bible says that’s bad. Its 200-word article does not say who owns the car, the date this may have happened, whether the police are involved or how LAD Bible came to know about it, but it does describe the act of vandalizing a sports car as “unthinkable.” Today is Friday, and you don’t need a government to run your propaganda state. Won’t you relentlessly enforce the values of the ruling class with me?

First, the good news: Kim Jong Un is probably dead, or maybe he has the gout. He’s definitely sick. The young ruler of Castle Lemongrab has not appeared publicly since early September, and he looks to have skipped the anniversary of the founding of the Workers’ Party of Korea. Maybe, as South Korea suggests, he has developed a condition related to his intemperate consumption of cheese. Maybe, as various bloggers say “with no corroborating evidence,” he has fallen to a coup. Or maybe the most reliable source here is Rodung Sinmum, which recently “carried a full front-page editorial calling for the ‘monolithic leadership’ of Mr. Kim as ‘the only center’ of power.” Kombat! Kids interested in linguistics take note: “monolithic” apparently has a positive connotation in North Korea.

Thank goodness our media isn’t dominated by a monolithic power center. On a completely unrelated note, Unilever, The Coca-Cola Company, Marks and Spencer, BT Group and Carlsberg have come together to start a new website, Collectively.org. Run by Vice Media’s creative services division, Virtue, Collectively will staunch the flood of bad news on the web. I quote the editor:

Today’s media is obsessed with fear-mongering tactics, and a pervasive pessimism that would have us all believing that “everything is f*cked, and it’s all our fault.”

Quotation marks theirs. Presumably, Collectively will counter this message with the idea that everything is fine, and nothing is our fault. Don’t worry: it will do so with “complete editorial independence” from the multinational corporations that fund it, even though Virtue is Vice’s ad agency for hire. “From time to time you’ll see stories of sustainable innovation from our partner organizations,” the site assures us, “but they are selected entirely on the merits of their newsworthiness and potential to create positive change.” This website founded by the world’s most prominent brands and edited by an ad agency cares only about reporting the news. For example, Three Scientists Just Won a Nobel Prize for the Tech That Powers Your iPhone’s Flashlight.

Journalism is dead. Long live marketing. Fortunately, that only applies to the internet. We’ve still got books, at least until the generation of children forbidden books is old enough to run society. Over at The New Yorker, Annie Julia Wyman wrote this insightful essay about what kind of towns ban books. We think of them as uneducated backwaters, but they’re more likely to be affluent communities with conservative school boards. The author’s home town briefly banned seven books from its high school for treating such subjects as race, colonialism, and “anti-capitalist sentiment.” Also sex—high school students still can’t read books with sex in them, because otherwise they might start thinking about it.

That’s why everyone in England is smarter than everyone in Texas. Just listen to their accents. Or, if you require more concrete evidence, consider this delightfully mean review of Steven Pinker’s style book. Props to Mose for the link. We discussed Pinker’s ideas on why academic writing stinks earlier this week. It seems the problems we detected in his essay are only magnified in the full book, which John Preston calls “waffle and bilge.” It also carries a whiff of favoritism:

As an example of what he considers good prose, he quotes a lengthy passage from a biography called Betraying Spinoza by the philosopher and novelist Rebecca Newberger Goldstein…The observant reader can’t help noticing that Goldstein also happens to be Pinker’s wife. He then goes on to give an example of an “Arresting Opening”…The sentence he chooses is from Richard Dawkins’s Unweaving the Rainbow…again the observant reader, glancing at the dust jacket, sees a laudatory quote from… yes, Richard Dawkins. [Dawkins says Pinker] is “a superb thinker and writer.” How heartening that both men should share an equally high opinion of one another.

I know I shouldn’t, but I love arch British cynicism. According to Preston, Pinker also writes this sentence: “A coherent text is one in which the reader always knows which coherence relation holds between one sentence and the next.” So maybe don’t throw away your copy of Elements of Style just yet.

Amid this occupation of our discourse, you can’t know who’s real and who’s an impostor. It’s basically exactly like this:

How complex is the premise of this sketch, and how many brushstrokes does it take Key and Peele to establish it? Not many. That’s craftsmanship, dude. Props to Ben al-Fowlkes for the link. When all other forms of communication have devolved into propaganda, comedy will still tell the truth. It’s a constraint of the form.