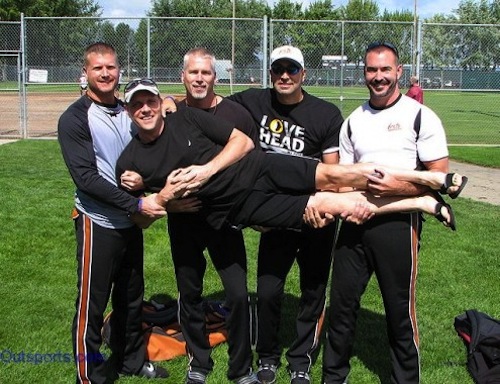 If you’re like me, you’re still waiting to get that $15,000 you won betting on who would finish second in the 2008 Gay Softball World Series. First place, as usual, went to the Florida Marlins. Second originally went to D2, a gay softball team from San Francisco, but D2 was stripped of its runner-up title after an examining committee ruled that three of its members were not gay. Now the five men questioned have filed a federal lawsuit against the North American Gay Athletic Association, seeking to get A) D2’s second-place finish reinstated and B) themselves $75,000 in damages. The suit has the potential to end NAGAA’s current rule allowing two heterosexual members per team, which makes the league about 80% gay. “That’s why I love this organization,” said assistant commissioner Chris Balton. “That’s what the rule means. If we allow it to be open, it would be just another softball tournament.” So, like, 60% gay?

First of all, I’m pretty sure this is the biggest rec-league softball argument of all time, which is saying something. I’m also going to put forth the first of many stereotypes and suggest that women would never have this problem; the lesbian softball league would determine who was gay by looking at fielding stats, and any player deemed insufficiently homosexual could just be somebody’s roommate for a month while she practiced. As it is, though,the  NAGAA has gotten itself into some hot, steamy water.

It’s tricky, first of all, for a gay organization to insist on its right to bar membership based on sexual orientation. Obviously it’s different when a discriminated-against group does it, but NAGAA’s position in this case is eerily similar to that put forth by the BSA in Boy Scouts of America v. Dale. Again, not letting me join the Black Panthers is different from me not letting black people join my book club.*

Yet it remains unsavory for gay dudes to argue that, ultimately, the freedom of association guaranteed by the First Amendment allows them to draft exclusionary policies based on who effs whom.

That cognitive dissonance is as nothing, however, to the larger problem of declaring in certain terms who qualifies as gay. One of the plaintiffs in the case claimed that, after he identified himself as bisexual, a committee member told him that “this is the Gay World Series, not the Bisexual World Series.” The difference is that the BWS allows the switch hitter, but that’s not the point. The point, as anyone who dated a Smith graduate will recognize, is a long and contentious argument in the gay community over whether bisexual people are, well, poseurs.

On one hand, that’s complete bullshit. Someone is gay if they say they’re gay, and if we caught Elton John freight-training Ke$ha tomorrow, we’d still agree he was a homosexual. One taco does not a Chi Chi’s make. But if we found out that, in addition to porn stars and college girls, Anthony Weiner had also sent pictures of his junk to 30 or 40 dudes, we might say that he is at least to some degree homosexual. One dude would probably not be enough. Ninety-eight dudes and two chicks would clinch it, even if he insisted afterward that he was straight. So it seems that there is some point, theoretical if not identified, where you have sex with enough people outside your professed sexual orientation that your professions are overruled.

Lord knows where that point is.*

Back in the day (fall of Rome to 1993) it didn’t matter, since publicly engaging in even one homosexual act made you gay forever. Now, though, we must admit that it is at least conceivable that someone might claim to be gay when they are not in order to gain some advantage—like getting on a softball team or making their OK Cupid profile more attractive. This seems extremely depressing until you consider how many millions of people used to have to claim to be straight to gain the advantage of not having their houses burned down, and then you’re like, oh yeah, now I remember what depressing feels like.

I have no idea how to reliably tell whether someone is gay without a copy of Desperately Seeking Susan. The fact that we have encountered a situation in which possibly straight people are possibly feigning homosexuality, though, seems like a massive step forward in the struggle against socialized homophobia. If getting second in the softball world series outweighs the consequences of publicly declaring yourself a homosexual, I think the NAGAA has achieved its goals.