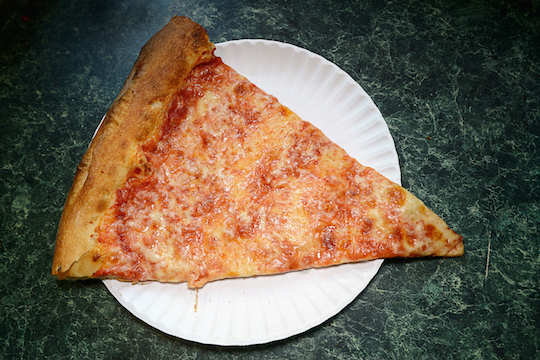 The possibility occurred to me, but I think it would have done more harm than good. Maybe I was just scared. Putting aside the physical risk, though, the guilt and legal exposure that come with assaulting a stranger on the street are not worth a slice of pizza. It’s not the pizza, of course, but the principle. Even still, the principle is not worth restructuring my day around taking vengeance on someone I’ve never met before. Yet doing nothing is unsatisfying. Take it from me; I tried.

The problem with this situation is the asymmetry of values. If some urge possessed me to eat a piece of pizza that wasn’t mine and I got caught, I would be mortified. I would offer to buy the victim of my theft another slice of pizza. That this man did not seem embarrassed, and even had the audacity—or, more likely, the psychic architecture of reflexive justification—to criticize the slice he had just stolen suggests the massive gulf in perspectives between individuals living in a society. What does one do with such people?

This man should not benefit from his willingness to eat strangers’ food, but I could not enforce that principle without incurring problems myself. I had shame at my disposal, but he was immune. This problem is sometimes called the sociopath’s advantage. In a system that uses empathy or social pressure to enforce good behavior, the person who experiences empathy or social pressure less strongly enjoys a superficial advantage.

I say “superficial,” because I don’t think the guy who took my fiancee’s slice is crushing it in other areas of his life. His ability to seize short-term opportunities without shame got him free pizza today, but I suspect it is a net loss to him overall. This fact seems comforting at first, but it only makes the situation more depressing from the perspective of society.  This guy is out there eating people’s pizza and pissing them off, and he’s not even benefiting from it. It would be better for him if he submitted to the same basic decency as the rest of us, and it would be better for us if he simply disappeared. But you cannot disappear him, or even correct his behavior in some fashion blunt enough for him to understand, because it would make things worse for you. Any attempt to do justice makes everything less just. The whole situation starts to look like a tragedy.

It is here we begin to suspect that this is not an ethical problem but a phenomenological one. People are going to steal. They will take your slice and act blasé when they get caught, even though they are not in great shape and it would probably be easy to take them down and pop their elbows. This urge is the problem. It’s not the loss of pizza. It’s the frustration. The proper attitude toward life is not some plan to deal with pizza thieves, but a strategy to care less about them.

I don’t know what that strategy might be, short of reading Seneca. Whatever it is, though, it is surely a better bet than controlling people’s behavior. We’ve got a whole society organized around doing that, and it only sort of works. One is tempted to imagine some brutal state of nature, where the people who play phone games with the sound on are the first to starve to death, and warlords cut off the hands of pizza thieves. But this correction, too, would punish us more than them. Virtually any other arrangement would, just like the present one. The worse person invariably has less to lose. This is the tragedy of living in a society, and ignoring it is the grace by which society is conducted. I guess.