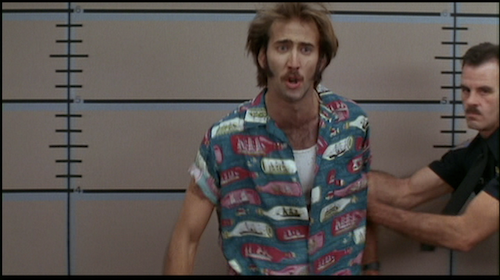 “There’s what’s right,” H.I. McDonough notes in Raising Arizona, “and there’s what’s right, and never the twain shall meet.” He was explaining why it’s okay to kidnap a baby, but it also applies to contemporary politics. Regular readers know that I support virtually every sort of transgression you can think of. It’s a paradox, because I’m also a big fan of individual conscience. Life is like a game of Monopoly, in that A) children have  a hard time finishing it and B) the written rules are not enough. You can set forth laws governing every aspect of human behavior, experienced and projected, and still they will not hold your society together in the absence of individual conscience. Just as a decent person will be good even when no one is supervising, a crappy person will invariably find ways to suck in accordance with the law. Today’s link roundup features conflicts between what’s right and what is (mostly) legal, and they remind us that a ship steered only by whistles and the lash is bound to sink. It’s kind of a bummer, actually, which is why it will be interspersed with movie clips. Because I care about my readers, and not so much about copyright law.

Admit it: you assumed Rick Santorum would eventually be undone by a gay sex scandal. I know I considered it the most realistic outcome, since reality is notoriously hacky, but it turns out that he’s a really not-subtle peddler of influence. Continuing a centuries-long tradition of understatement, the Times notes that “connections Santorum made while in office helped soften the sting of his unexpected re-election defeat.” How soft? After sponsoring bills to direct more Medicare spending to hospitals in Puerto Rico, he left the Senate and joined the board of United Health Services, a management company that runs hospitals in Puerto Rico. He made almost $400,000 during his tenure at UHS; he also got consulting fees for work with coal companies for whom he had earmarked funding as a senator, and otherwise put together “a lucrative post-government career based largely on income from businesses that had benefited from his work in Congress.” Of course, Congressional ethics rules don’t cover what you do after you leave Congress. You’d need to install some sort of internal ethical monitoring system for that. Santorum described himself as a “Jesus candidate” this week in New Hampshire, bee tee dubs.

That’s better. It’s funny how you can sympathize with outlaws, provided their concerns feel real enough. Consider President Obama, who may have violated the Constitution by recess-appointing a head of the Consumer Financial Protection Bureau. That’s legal, but Congress is technically not in recess. During the break, individual senators and representatives have called their bodies into pro-forma session for a few minutes each day. That way, they can go on blocking all appointments to head the government agencies Congress voted to create. Seriously: Congress is in session solely to subvert the workings of Congress. John Podheretz, who regards the President’s “power grab” as a sign of weakness, has published the same editorial at Fox News, the New York Post and Real Clear Politics on the same day—although technically the first two are owned by the same company, and the third is an aggregator owned by Steve Forbes.

Frances McDormand makes anything better. If you are concerned that large and shadowy corporations are spending millions of dollars to sculpt public opinion, you are not alone. Newt Gingrich is worried, too. As Timothy Egan points out in the Times, it’s pleasantly ironic that Newt lost 20 points in 20 days due to negative advertising in Iowa. He was a principle actor in getting Citizens United v. FEC to the Supreme Court, after all, and he arguably influenced the composition of the bench before it got there. Listening to him complain about the way the decision he worked so hard to force has hurt him personally, you almost get the impression that Gingrich has no conscience at all. But you would have to ask his wife.

I apologize for inflicting on you the worst acting moment in the film near the end of that clip. I live in a place where one flaw does not turn the diamond back to coal. Proof: one week ago today, the Montana Supreme Court upheld a state law limiting corporate spending on elections, in defiance of Citizens United v. FEC. Two judges dissented on the grounds that the court was bound to submit to the decision of the federal supremes, but one of the dissenters excoriated that decision in his opinion. I quote Justice James C. Nelson:

Corporations are not persons. Human beings are persons, and it is an affront to the inviolable dignity of our species that courts have created a legal fiction which forces people—human beings—to share fundamental, natural rights with soulless creatures of government…While corporations and human beings share many of the same rights under the law, they clearly are not bound equally to the same codes of good conduct, decency, and morality, and they are not held equally accountable for their sins. Indeed, it is truly ironic that the death penalty and hell are reserved only to natural persons.

I don’t believe in hell, but at times the idea comforts me. It is unmanly—for me, unwomanly for others—to wait for someone to do your justice for you, though. I lean left, as this and most other Combat! blog posts will indicate, but there is one area in which I agree wholeheartedly with my conservative fellows: shame. Get elected to the United States Senate and make laws about people so you can get money. Work to wreck democracy and then complain that your wrecked system didn’t pick you. Paralyze the executive branch because you don’t control it for the first time in eight years. Sooner or later, no matter how much power you agglomerate, you will find yourself alone with yourself. And relentlessly, despite your best efforts, you will wind up thinking about what you did.