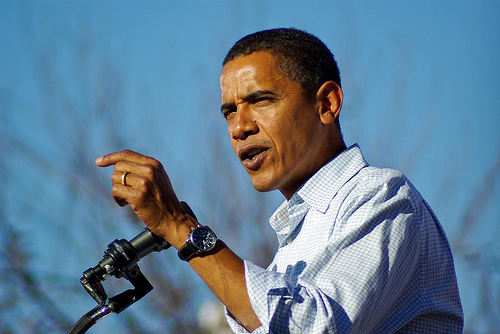 Barack Obama, whose administration has pursued zero successful corruption prosecutions relating to the financial meltdown of 2008

Matt Taibbi is a writer with the virtues of his faults. The man who coined the phrase “vampire squid” to refer to Goldman Sachs has a knack for arresting rhetoric, but his reasoning can be breathless, too. Goldman Sachs is probably less like an evil sea monster and more like the complex problem of preserving egalitarianism in a post-industrial FIRE economy. Taibbi sure can write a screed, though. On Tuesday, he posted a scathing indictment of the 2012 election and, I think it’s safe to say, contemporary American democracy. As Americans literally riot in the streets over the outsized influence of Wall Street and corporate money on government and society, the race to the race to the White House feels like “a banal bureaucratic sideshow to the real event – the real event being a looming confrontation between huge masses of disaffected citizens on both sides of the aisle, and a corrupt and increasingly ideologically bankrupt political establishment, represented in large part by the two parties dominating this race.” Read that again and tell me any part of it seems implausible besides “looming confrontation.”

Taibbi’s argument should be familiar to anyone who has listened to a person ignorant of politics explaining why that makes him smart. “They’re all the same” is a convenient excuse for not participating in an electoral system that requires analysis and decision-making, and I am suspicious of any argument that makes laziness coincide with virtue. Yet Taibbi makes a compelling case that our sitting President and any of the men likely to run against him are interchangeable with respect to the country’s most pressing problem: corporatocracy.

Consider three of his supporting facts:

That last one is not strictly a fact, but it’s hard to argue that the governor’s son who made a second fortune in leveraged buyouts is the man to break the link between corporate money and politics. As much as it pains me to say so, the President whose administration has barely regulated a demonstrably dangerous financial industry, punished no one for a mortgage investment scheme that wrecked America, and needs a recess appointment to put someone in charge of a consumer protection bureau is not the guy to do it either. If 2012 were Tombstone, it would be about the effete sheriff character campaigning against his twin brother.

Unless, of course, you reject the premise that money runs contemporary American democracy. If you believe the system is not corrupt and that the democratic republic of the United States chooses its leaders according to the will of the people, then immigration and job creation and whether gay dudes can get married return to being first-order problems. The tool for fixing them is government, and government still works.

I hope that is the correct assessment. Taibbi thinks otherwise, but Taibbi likes an epic subject. Taibbi also notes, however, that since 2004, the candidate who spends the most money wins a given House or Senate race between 74% and 94% of the time. That makes money a better predictor of electoral victory than any factor except being black. In 2008, at least at the presidential level, donation even trumped that prejudice for first time in history. This year, in the first national presidential election since Citizens United v. FEC, money will probably not get weaker.

For those of us who are not multinational corporations, the question becomes whether this state of affairs is regular-ugly or whether our democracy has been corrupted. If the United States is in danger of becoming a plutocracy and the two major parties do not significantly differ with respect to plutocrats, we need to consider the possibility of systemic change. I have just read a long blog post by Matt Taibbi, so probably I am not thinking clearly. Maybe, though, I have that off-balance feeling of having just been warned.