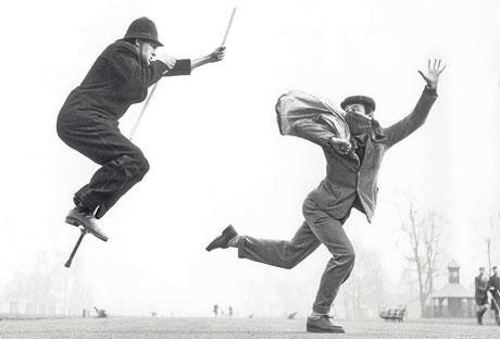 Don't let the pogo stick fool you—he is going to beat the living shit out of that burglar.

It is a known fact that our society has lower standards for public behavior than any America that has come before. It is also well known that we are a nation of scolds. How to reconcile these two truths? You can drill a hole in the ocean floor and dump thousands of gallons of crude oil into the Gulf of Mexico or claim to read all newspapers, and that’s cool, but take a picture of your wang and your career is over. It’s a balancing act, this American life of indulging every venal impulse while making sure never to leave yourself vulnerable to the judgment of 300 million other people doing same. Today is Friday, I have an absurd amount of work to do and a Blondie-style cocktail party to host when it’s over, and today’s link roundup is all about what you can do and what you can’t. I think you’ll be surprised by both. As usual around here, “surprised” means “grimly indignant.” Won’t you indignate with me?

The good news is that someone has finally found the bottom of the pool in contemporary electoral politics and, like a child, he has found it with his chin. Joe Ricketts publicly disavowed the so-called Ricketts plan, a $10 million super PAC strategy to link President Obama to black liberation preacher Jeremiah Wright. You might remember Reverend Wright from 2008, when John McCain refused to make him a campaign issue pretty much every week between January and November. After four years, the best known plan to defeat Obama is still to point out how black he is. Like a bunch of wussies, though, they’re not doing it, possibly because the leaked Ricketts plan has drawn condemnation from everyone to the left of Grover Norquist. So Ricketts will have to find another way to spend his $10 million. Also, when the Times says that his holdings include “a baseball team in Chicago,” they mean the Cubs.

I was initially delighted by this map of what states are best and worst at, and then I realized that I have no idea whether any of it is true. I’m not saying that Maegan Carberry isn’t a responsible journalist, but A) her name contains a typo and B) her introduction to this map ends with “Btdubs, can someone from Michigan explain what an Asian carp is?!” I know you have the internet, Maegan Carberry. Other telltale signs that we may not be looking at an airtight work of map scholarship include Missouri’s award for “most Ozarks.” The important thing is that Iowa has retained its titles for both most organic hogs and most hog waste. Everyone wants to go to heaven, as the old saw goes, but nobody wants to drink poisonous groundwater from a waste lagoon.

The old saws need constant maintenance. Over at Ezra Klein’s Wonkbook, wonk/book Klein articulates a case for gay marriage so grounded in economic theory as to border on the autistic. He proceeds from the claim that traditional man/woman marriages developed on the firm model, by which each spouse contributed specialized skills—wage-earning in the case of men, house/childkeeping for women—to create a versatile unit. Now that men and women can function almost equally as wage-earners and both genders are terrible at cooking, marriage no longer confers an economic advantage. That’s why there haven’t been any weddings since 1969—or have there? According to economists Betsey Stevens and Justin Wolfer, “Modern partnerships are based upon ‘consumption complementarities’—the joy of sharing things and experiences—rather than the production-based gains that motivated traditional marriage.” First of all, are you turned on yet? Second, as Klein points out, there’s no reason why two people of the same gender can’t function just as well in a consumption-complementary marriage, which an older generation called “companionate.”

They can’t have kids, though, and having kids is the sole reason for human affection. I know because Pat Robertson said it impulsively on TV, in much the same way that he impulsively tells this woman to destroy a statue of Buddha:

Props to Ben al-Fowlkes for the link. I really enjoy imagining this friendship, in which one party writes to the 700 Club to ask if what the other party is doing is okay. Also, Pat Robertson has clearly been Pat Robertson for too long to understand what happens when a normal, untelevised person exhibits religious fanaticism. I was just in the neighborhood with my hammer, she said. Can I come in?