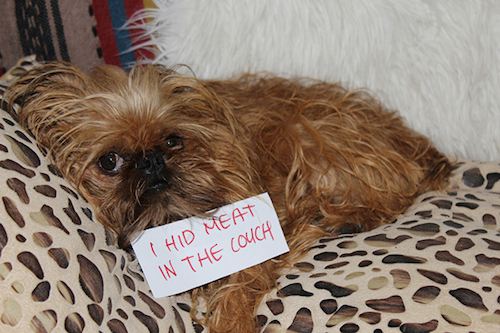 There are two of you: the person you think you are, and the person who sees that person clearly. You can ignore your assessment of yourself; you can even forget about it for long stretches of time, but you cannot un-know it. Insofar as we spend most of our time faking people out and excusing ourselves, we are the people we claim to be. At one time or another, though, our honest assessments fill our heads, and we become the person who sees clearly. That person is a dick. Today is Friday, and our crises of conscience are in the mail. Won’t you put off opening the box with me?

Molly Ball claims in this awesome Atlantic profile that she can’t put her finger on what’s bothering Frank Luntz, but she also politely neglects to mention that he is an awful person. The conservative messaging consultant became disillusioned with politics after the 2012 election, and he’s now a year in to a full-blown crisis of confidence in the American people. “They want to impose their opinions rather than express them,” he tells Ball. “And they’re picking up their leads from here in Washington.” That’s from the man who branded the estate tax the “death tax” and coined the phrase “climate change” as a more pleasant alternative to “global warming.” He also went on NPR and said this:

To be “Orwellian” is to speak with absolute clarity, to be succinct, to explain what the event is, to talk about what triggers something happening…and to do so without any pejorative whatsoever.

Now he is terrified by the degraded quality of American discourse. It’s kind of like Ebenezer Scrooge waking up on Christmas morning to find that London has cancelled the holidays and sent everyone back to work. Don’t worry, though: Luntz is still halfway wrapped in a warm cocoon of denial. He blames Obama and his invidious class warfare for the ruined state of Washington, and he sees only one solution. “The politicians have failed,” he says. “Now it’s up to the business community to stand up and be heard.”

Finally, right? Luntz’s redemption may be frustratingly incomplete, but at least we have the apparent defeat of Shia LeBeouf. The artist beloved for producing works the likes of which the world had only seen once before has announced his retirement from public life “in light of recent attacks on my artistic integrity.” The attacks came when he got caught ripping off a comic book for a movie, then plagiarized his apology, then blanketed the world with quotes vaguely related to authorship and appropriation while simultaneously taunting the guy from whom he originally stole. Now that we have scurrilously attacked his integrity by pointing out what he did, LaBeouf is striking back the way only an artist can: by denying us a third Transformers sequel.

Fortunately, his famous words will live on. Props to Ben Gabriel for the link to this amazing Pinterest page, which only gets better when you consider how the quotes were selected. Negative props—sporp?—to the author of the page, however, for adding the jangling “out” to Mark Twain’s famous dictum, “Better to remain silent and be thought a fool than to speak [out] and remove all doubt.” Still nicely relevant to the late history of The Beef.

A corollary to Twain: better to leave a handgun in your vagina and be though crazy than to remove it and, um, remove all doubt. Stay with me here. Cormac McCarthy’s ex-wife has been arrested in Santa Fe after pointing a handgun at her boyfriend during an argument re: space aliens. The gun was handy because she recently had been using it to stimulate her vagina while asking him “Who is crazy, you or me?” Don’t make me choose. This story is obviously rad on several levels, not the least of which is poor Cormac McCarthy’s name being in the headline despite his having nothing, at least directly, to do with it. It’s also nice that the Daily News included related links to other stories about stuff in vaginas throughout.

The Daily News doesn’t care what you think, though. It has no conscience, like a handgun or 2009 Frank Luntz. And the rest of us have to contend with this stuff, as if contending with ourselves were not enough.