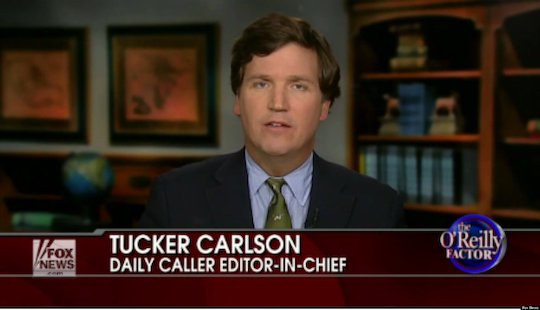 As recently as two months ago, this country was run by elites: latte-sipping, liberal arts degree-holding, pilates-skipping elites. Fortunately, the election of Donald Trump and meteoric re-ascendence of the Republican Party has solved all that. Now that the billionaire son of a millionaire is president, America is going to start working for ordinary people again. And you know who will be leading the charge? Conservative pundits. They’ve broken free of the oppression that confined them to think tanks and the editorial pages of the Wall Street Journal, and now they’ve taken up the cry of the real American. Today is Friday, and we’re finally going to do something about the elitists who stopped tax cuts for the rich and saddled the country with burdensome welfare programs. Won’t you go sans culottes with me?

First, the good news: the media is beginning to realize that journalists live in a bubble, isolated from normal Americans. The bad news is that the media so realizing is the Federalist. Previously the province of dudes who couldn’t understand why they had to share captainship of their high school debate teams, the Federalist has become a champion of egalitarianism. Consider this story about a tweet, Watch a Bunch of Journalists Freak Out After Being Asked if They Know Anybody Who Drives a Truck. It refers to John Ekdahl’s fatuous question on Twitter. Here’s Federalist co-founder Sean Davis:

Even after a presidential election in which scores of media personalities were shown to be entirely disconnected from the country and people they report on, the liberal media bubble is alive and well. All it took to reveal the durability of that bubble was a simple question about pickup trucks…Ford F-150’s are basically the jeans of vehicles: it’s nearly impossible to find a person in America who either doesn’t own one or doesn’t know someone who owns one.

I drive a pickup truck, and I am a journalist, I guess. Using the dark art of reportage, I learned that the most popular F-150 packages retail for around $45,000 apiece—about 1.5 times the median personal income in the United States. At that price, I bet I could do the “nearly impossible” and find someone who neither owns one nor knows anyone who does—perhaps in the break room at Target, or on the bus. But the actual cost of a pickup truck and who can afford to buy one isn’t the point. The point is that journalists don’t know truck owners, either because their jobs do not involve hauling or because automobile that costs the same as tuition at Harvard equals working class. Take your pick.

A few journalists still understand the lives of ordinary Americans, of course. Business Insider reports that Tucker Carlson continues his On-Air War With Elitism. Carlson used to host CNN’s Crossfire and founded the Daily Caller, so you can blame him for the worst elements of two different eras of political media. Today, though, his focus has turned to class war:

Carlson…holds ardent views about small government, excessive regulation, and a multitude of other issues typically shared among Republicans. But the issue he perhaps is most passionate about these days cuts across party lines: He describes it as a distaste for elitism, particularly among political journalists who reside in the Acela corridor.

Ah, yes—Carlson’s famous distaste for elitism. He probably learned it at boarding school, where he was sent by his father—a news anchor in Los Angeles and former US Ambassador to the Seychelles—and his stepmother, the heiress to the Swanson frozen food fortune. Depending on how much you acknowledge the legitimacy of step-children, Carlson’s great uncle is Senator J. William Fulbright. That’s where he got his distaste for elitism: as a boy, during his summers at Camp Dissembling Scion of the Ruling Class.

It’s almost as if Carlson’s commitment to small government and reduced regulation came from some kind of material self-interest. But if there’s one thing American politics have taught me, it’s that Republican versus Democrat isn’t about boring stuff like who gets taxed or how the government serves what constituency. It’s about the bands you listen to and where you go to church. It’s also about what you watch on TV. The benevolent nerds in the data visualization department of the New York Times have determined, among other things, that whether a person voted for George W. Bush in 2000 was a less strong predictor of support for Trump than whether they watch Duck Dynasty. That’s a bummer. The greater bummer, though, is learning that the television show Hillary voters watched more than any other group was Family Guy. That’s it, you guys—I’m a communist now. I have joined the Communist Party. Fucking Family Guy. The republic is doomed.

At least we have a clear sense of what every kind of person ought to believe. In a rambling, sometimes tenuous, and utterly thrilling essay at Jacobin, Shuja Haider points out the structural similarities between identity-based reasoning on the left and white separatism on the right. There’s a lot to digest here, including plenty of rumination on slacktivism that should probably be its own piece. But the central insight—that any reasoning that makes group membership the overmastering component of individual identity shares its basic premises with bigotry—is golden. Quote:

[There is] a clear principle at work, one that has become characteristic of contemporary social justice advocacy. The eligibility of people to make certain kinds of claims is dependent on the set of criteria that fall into the category of “identity.” Your right to political agency is determined by your description. We’re left with a simple rubric for determining the truth-value of a statement. Who said it, what group do they belong to, and what are members of that group entitled to say?

This passage refers to how woke Twitter responded to Lee Fang’s criticism of Safety Pin Box, but it might as easily describe how progressives evaluate questions of cultural appropriation, or how white supremacists construct the rights of minorities in American democracy. What group do you belong to, and what are members of that group allowed to say?

Meanwhile, at the Atlantic, John D’Agata gets dragged under William Deresiewicz’s arch, patrician chariot. In what is ostensibly a book review of the essay anthologies D’Agata recently edited, Deresiewicz launches a systematic critique of the University of Iowa nonfiction workshop director’s whole aesthetic—one that includes his notorious conflict with fact checker Jim Fingal at The Believer in 2012. That’s a story in itself, but Deresiewicz captures its essence in the sentence “Fingal finds seven fabrications in the first sentence alone.” His argument is detailed but never boring, and it constitutes an attack on the quote-unquote lyric essay as ill-defined, indulgent, and divorced from what should be the natural advantage of the form: facts. Read it. Read everything. Or reconnect with real America by buying a giant truck and watching TV.