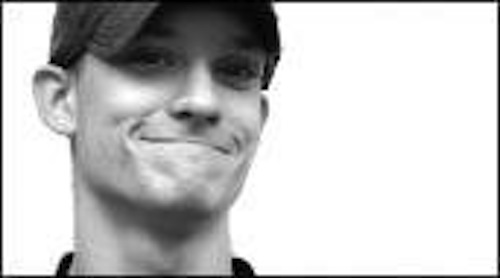 Mike Thurau—sorry it's pixelated. It's his headshot, because he's a columnist.

Yesterday afternoon, gentleman of leisure Aaron Galbraith sent me a link to this post on TabooJive.com,* in which Mike Thurau considers an odd phenomenon of the iPhone’s autocorrect feature. I was familiar with the name Mike Thurau from our own Combat! blog Comments section; I was also familiar with the post, since I wrote it. The beauty of the internet is that you can copy an entire piece of writing, paste it into a text document with your name at the top,

and send that text document to some editor without even having to type anything. Okay, you have to type the query email—“attached is a short piece about an amusing iPhone function my friend discovered”—but there are a lot of templates out there. I initially thought that the Norberto King thing was the only piece of my writing Mike Thurau had plagiarized. Then I found this select-all copy of a Combat! blog post about unboxing videos. Then I found a whole bunch more.

It’s especially creepy to read the plagiarized version of something you wrote when it makes extensive use of the personal pronoun.  Here’s Mike Thurau on Facebook. I think we can agree that his plagiarism of my work was probably not personal, and that it was about him—most likely about him making deadline—and not me. Yet reading one of his columns and recognizing a series of sentences I had written, I felt a weird dislocation of identity, as if someone at the dinner table had begun speaking in my voice. I had forgotten the phrase “America’s historic crazy strainer,” and I had certainly forgotten boilerplate sentences about who won which seats. My first impression on reading them, therefore, was that Mike Thurau and I had a lot in common. It was just how I would have said it.

Mike Thurau does seem a little more rhetorically liberal than I am. He likes a strong flourish where I like an affected stilt, which—when applied on a cognitive level—allows him to find connections between events that I considered unrelated. Here’s Mike Thurau on the British versus American systems: “But wait, you say, the British pay more in taxes than we do. Well, before you cross your arms in satisfaction and recline yourself into the plush embrace of a well timed ‘gotcha’ moment, this is only half true.” Here’s me on the same topic: “‘Ah!’ you say, somewhat effeminately, ‘but the British pay much more in taxes than we do.’ Like so many things that everybody knows, that turns out to be only sort of true.” Mike Thurau’s version of my work enjoys the embellishments a little more. At the risk of sounding like even more of a douche than the douche who sounds like me, I prefer the rapier, where Mike Thurau likes to see the saber flash.

This difference in our styles is most evident in the humor pieces. While many of the same topics capture both my and Mike Thurau’s imagination,*

they play out differently on different stages. In Mike Thurau’s versions of jokes I wrote, the buffoon is more likely to be kicked in the buttocks. Here’s his ethnography of the Juggalo:

“And I don’t wanna talk to a scientist, y’all motherf—-rs lying, and getting me pissed.” I think we’ve come to the root of our problem here. I can understand your frustration that science tends to privilege Western ways of looking at the world as opposed to other, more carnival-based methods of understanding. But if you refuse to accept a scientist’s conclusions on something, you can test it yourself. All science tries to say is that every time we have done A, the result was B.

And I don’t wanna talk to a scientist / y’all motherfuckers lyin’ and gettin’ me pissed. This actually puts us in a pretty difficult position. I can understand your suspicion that science is a primarily instrumental endeavor, whose approach seems to privilege Western ways of knowing over more circus-oriented systems of inquiry… It’s possible that you find scientific explanations frustrating because your background has not provided you with the tools to confidently evaluate them. Q.v.: your belief that the universe is a dark carnival, when contemporary scientists agree that it is more likely a space-time manifold. If you are satisfied with your worldview as it currently stands, that’s great, but if you genuinely want to increase your understanding of fuckin’ magnets and shit, you’re going to have to open yourself up to new experiences.

I flatter myself that mine is the lighter touch—that I am a dick by transparently pretending to help, where Mike Thurau is a dick by refutation. Speaking of being a dick: I sold the magnets thing to Crave, too. It was cheap enough that I didn’t bother with a license, so it’s possible that Mike Thurau has violated copyrights held by multiple parties. I wouldn’t know without asking some corporate lawyers.

That catty tone brings us to what I find most vexing about Mike Thurau’s career—as a freelance writer and as a graduate student and TA at BGSU—writing one more draft of my work. It is a drag to find myself plagiarized on Thursday afternoon, but it is also kind of fun. It makes me feel like I wrote some things worth stealing, and that in turn offers the comforting illusion that I am similar to those writers whose work I have plagiarized over the years. I would be lying if I claimed to have never stolen a gag or gotten excited by an idea I improved too little before passing on.

Who was it that said good writers borrow, and great writers steal? Maybe it doesn’t matter. The idea is what counts, and the question of who wrote it is posed by vanity. Probably it is vanity that makes me react so spitefully to Mike Thurau. His broad impersonation of me offends my vanity, and it offends my vanity to see his face above my voice. It could be the hat. A hat should be taken off when you meet a woman and left off for the rest of your life; nothing looks stupider than a hat. PJ O’Rourke said that, and it has always struck me as true.