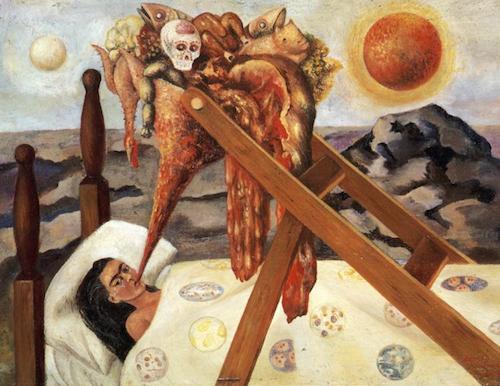 In Spanish, the word for “desperate” is “desesperado”—literally de-hoped. It’s an interesting piece of etymology, since the English “desperate” often connotes frenzied activity: a desperate search, a desperate plea, the wandering trouble that is the desperado. Our actions—our desperate attempts, if you will—tend to reach their peak when hope is gone. That is the moment when action itself feels like it should be enough, when what we’re trying to accomplish fades into the experience of doing something. Today is Friday, and despair is a spectrum with pure action at one end and pure efficacy at the other. Won’t you slide along with me?

Let us begin in the realm of pure action, where everything we say and do yields exactly the same outcome: nada. The White House has released its report on climate change, which joins roughly eleventy gajillion other empirical analysis, longitudinal studies and calls to action saying that A) we’re making the Earth hotter and B) we have to do something about it so fewer really bad things happen. But is global warming even real? That’s the insanely frustrating question that every public conversation about climate change settles upon, thanks in part to obstinate motherhubbards like SE Cupp. Here she is accusing Bill Nye and other science guys of “bullying” people who don’t believe climate change is happening. Look, scientists: just because you’ve spent your whole life studying this phenomenon, and I can’t understand the information you’ve brought back to me, doesn’t mean you’re right and I’m wrong. Democracy means my ignorance is as good as your knowledge.

The Earth is going to get several degrees warmer, causing the seas to rise and the weather to get even crazier, and you can’t do anything about it because coal mine owners have paid half our political system to argue that we can’t really know anything. Don’t worry, though: you can stay inside and watch cable. The Verge has laid out Comcast’s argument for why it should be allowed to purchase Time Warner Cable, which relies heavily on the claim that its competitors include not just other cable and internet companies, but also Apple, Google, any cellular internet provider, Facebook and Amazon. See? There’s still plenty of competition in the enormous tech company market. Between the FCC and Comcast customer service, there remains plenty of competition to see who can ignore your phone calls with the most impunity, too.

Some events are just too big and momentous to stop. Then there are weddings. This WikiHow explaining how to stop a wedding is a masterwork of insanity, and not just because it assumes you are stopping the wedding of a woman who broke up with you. Because it is written for crazy people, it includes tips about how to ensure that guests don’t see you and realize you’re up to something. “Unless you have been invited, you will have to find out where the wedding ceremony is to be held, and the exact time,” it advises. “Ask family members or mutual friends if it doesn’t appear too suspicious, or perhaps check the wedding notices in the local newspaper.” If the wedding is outdoors, you can linger just over the horizon.

Just thinking about stopping a wedding makes my stomach lining itch. Thinking about how I don’t have to stop a wedding this weekend, on the other hand, fills me with an unearned but satisfying sense of relief. There’s nothing better than imagining problems you don’t have. Consider the Onion’s UN report on magical realism, which warns of increased danger of women’s tears flooding the entire world. Don’t worry, you guys: we averted the threat of magical realist climate change when everybody stopped reading books. It was hard, but human beings can all come together when we really need to.

And yet we have done nothing to advance bird rights. I’m sure that the Bird Rights Activist Twitter feed is not as funny as I think it is, but I still love it. Animals who speak in broken English are funny. Birds are especially funny, even when they don’t talk. A bird who speaks broken English and is morally superior to everyone is comedy gold:

Even the picture is funny. I also enjoy the bird’s obsessive focus on bread. What can I say? I love a fictional character, and coincidentally I have consistently responded to anxiety by retreating into aesthetics. Despair is for suckers, anyway. If you’ve read the French existentialists, you know it’s just an excuse.